No Medals for the Major (mini-review) 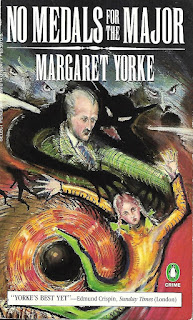 No Medals for the Major (1974) by Margaret Yorke

Major Frederick Johnson is a very lonely man who is trying to make a new life for himself in Wiveldown. When he retired from the army, he bought a snug little cottage and began to make it his own with new paint and attention to the garden--taming the wildness that had taken over there. He is just beginning to make friends and try to find his place in the small community when tragedy strikes. A young girl disappears and then her body is found in the trunk of the major's car. Despite the fact that many of the townspeople privately believe the major to be completely innocent of the girl's death, gossip and negative public opinion soon take over--disrupting the shy, quiet pattern of the major's life and changing it forever.

This is a heartbreaking story about the weight of loneliness and the sense of isolation that Major Johnson feels in his new town. It is also about the power of rumor and public opinion; about how those two things can destroy a life just as surely as a deadly accident or murder. This is a well-written book, but a very disturbing one--both for the death of the young child as well as for the psychological suspense. It's definitely not my usual type of read, but those who like inverted mysteries with psychological impacts should appreciate it very much. ★★★★

First line: Major Johnson closed the front door of his bungalow and tested the lock.

Last line (the last line would be a spoiler--so I'm giving a few lines before): He thought for a moment as he sat down in his armchair of his companions in the army; of the sense of comradeship; the heat and dust of the desert; the calmer postwar life. There were tasks for every day.