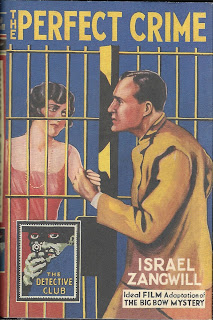 This reissue of Zangwill's The Big Bow Mystery (also published as The Perfect Crime) also includes Poe's locked room story "The Murders in the Rue Morgue." These are thought to be the earliest examples of the locked room novel and short story.

The Big Bow Mystery: As mentioned above, it is one of the earliest examples of the locked room mystery. The solution may seem a bit trite to those of us in the 21st Century, but it is good to remember how puzzling and fresh it must have been to readers of the London Star in 1891. The story begins at the rooming house of Mrs. Drabdump (gotta love those Victorian names). She has been directed to wake one of her tenants, Mr. Arthur Constant, early so he can make an important meeting. Naturally, she finds that she has overslept and is rushing 'round to prepare breakfast. But when she tries to rouse Constant, she receives no answer. At first she is not too alarmed. The poor man had been suffering from toothache and perhaps he feel into a deep slumber once he finally did get to sleep. But when repeated efforts fail to waken him and a final, violent assault on his door does not bring him out, she feels sure that he must be lying murdered in his bed. She rushes across the street to the home of retired policeman, George Grodman. Grodman succeeds in breaking down the locked and bolted door and a terrible sight is revealed. Constant is lying in bed with his throat cut. He is still warm...so he has not been long dead. The windows are all fastened tight. There is no weapon to be found in the room and no way the culprit could have escaped. Inspector Edward Wimp (snort) of Scotland Yard is called in to investigate officially. But there seems to be no solution. There is no item in the room with which the dead man could have harmed himself, therefore it cannot be suicide. There is no way anyone could have gotten out of the room, therefore it cannot be murder. Eventually, however, clues come Wimp's way that convince him that Tom Mortlake, Constant's fellow tenant and supposed rival, has committed the crime. A trial and conviction follows....but Grodman supplies the final twist that produces the complete solution. This is a well-written and quite witty short novel. The final twist is ingenious for its time. ★★★★

First line: On a memorable morning of early December London opened its eyes on a frigid grey mist.

Clues, which at such seasons are gathered by the police like blackberries off the hedges, were scanty and unripe, Inferior specimens were offered them by the bushels, but there was not a good one among the lot. The police could not even manufacture a clue. (p. 26)

When he asked him [Denzil] for the True--which was about twice a day on the average--he didn't really expect to get it from him. He knew Denzil was a poet. (p. 46)

There are three reasons why men of genius have long hair. One is that they forget it is growing. The second is, that they like it, The third is that it comes cheaper..... (p. 47)

To dash a half-truth in the world's eyes is the surest way of blinding it altogether. (Mr. Grodman; p.135)

Last line: Some of the working men who had been standing waiting by the shafts of the hansom helped to bear the stretcher.

"The Murders in the Rue Morgue": The classic story credited with starting the whole detective ball rolling.  Dupin is a moody, night-loving character.  Faced with a seemingly impossible crime, he uses an investigative method--observing everything and discounting nothing...until it can be proven irrelevant or impossible.  Definitely a forerunner of Holmes's method: "When you have eliminated the impossible, whatever remains, however improbable, must be the truth."

First line: The mental features discoursed of as the analytical, are in themselves, but little susceptible of analysis.

Last lines: I like him especially for one master stroke of cant, by which he has attained his reputation for ingenuity.  I mean the way has "de nier ce qui est, et d'espliquer ce qui n'est pas."*

*To deny what is, and to explain what is not. (from Nouvelle Heloise by Jean-Jacques Rousseau, 1761)

Deaths = 2 (one stabbed; one strangled)