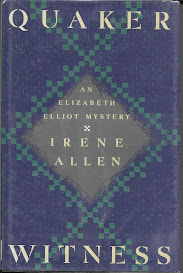 Janet Stevens is a graduate student in the Harvard Paleontology Department. She specifically asked to work with Dr. Paul Chadwick because he was the leading researcher in her field. But she didn't know his reputation with female students--no female student had finished her degree under his advisement. They couldn't take his harassment. When Janet suffers the same issues, she is brave enough to file a complaint with the dean of students. But her troubles don't end there. She is ostracized by faculty and fellow students alike and labeled a "trouble maker." And then Dr. Chadwick is found dead in his lab and what was made to look like an accident with a dangerous gas is determined to be murder.

Janet is the first on the police's suspect list, but she isn't the only person in the department to have had problems with Chadwick. There are male students whose work has been brought into question by the difficult professor and one of his fellow faculty members was facing issues with their tenure case. Janet, who grew up in a Quaker School, seeks refuge and comfort at the local Meeting House where she becomes friends with Elizabeth Elliot. Elizabeth is certain that Janet is innocent and she takes up an amateur investigation to get to the bottom of the mystery at Harvard. In addition to sexual harassment, fraud and blackmail are lurking in the hallowed halls--but which provided the motive for Chadwick's death?

This is an okay academic mystery. The motive is a fairly likely one in the halls of academe and the plotting is adequate. I must say, however, that I found none of the characters to be particularly compelling. I definitely sympathize with Janet and the other students who have had to endure sexual harassment from the thoroughly nasty Dr. Paul Chadwick. But even my sympathy for the characters' situation didn't provide enough investment in the story. I don't mind that Chadwick has been eliminated (it's hard to feel sorry for such a man) and I don't particularly care who did it. Elizabeth isn't a terribly interesting sleuth, either. She seems to me to be rather colorless and to just drift through her investigation. ★★

Last line: The lilies on the windowsill sway gently in the breeze as if in answer.