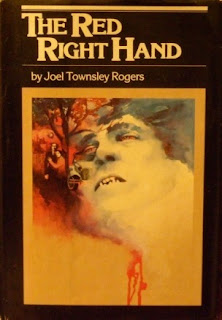 From the book's synopsis: After the death of Inis St. Erme, Dr. Henry Riddle retraces the man's final moments, searching for the moment of his fatal misstep. Was it when he and his bride-to-be first set out to elope in Vermont? Or did his deadly error occur later--perhaps when they picked up the terrifying sharp-toothed hitch-hiker, or when the three stopped at "Dead Bridegroom's Pond" for a picnic?

As he searches for answers, Riddle discovers a series of bizarre coincidences that leave him questioning his sanity and his innocence. After all, he too walked those wild, deserted roads the night of the murder, stranded and struggling to get home to New York City. The more he reflects, his own memories become increasingly uncertain, arresting him with nightmarish intensity and veering into the irrational territory of pure terror--that is until an utterly satisfying solution emerges from the depths, logical enough to send the reader back through the narrative to see the clues they missed.

It appears that this is one of those novels that you either really like or you don't. And I am in the latter camp. This is one of the most frustrating books I've ever read. I'm not a fan of non-linear storylines--especially when the whole point of such a method seems to be to mix the reader up even more than the basic plot will do. There is a surreal dreamlike quality to the narrative that doesn't help the reader to keep things straight even if the story had been told in a straightforward manner. Our narrator, an evidently unreliable narrator, is a doctor whose running commentary gives the impression that he has dipped once too often into his medical supplies. He tells us both that he knows what the killer tramp looks like and yet that he never saw him:

I know the look of him as well as I know my own. Perhaps better. I know his height, his weight, his age, the color of his eyes and hair, the number of his teeth. I know the clothes he wore, to the last item....I have never laid eyes on him.

He deliberately says things like this--giving the reader just cause to believe that the doctor is really the killer, mentally deficient, deliberately lying, or doped up. Why wouldn't we? He not only says things like this, but tells us he was camped out with his broken down car right at the place where the killer supposedly turned in a great big car and he (the doctor) never saw him. He wonders if he went into some kind of trance (conveniently) right when it all happened. One has to think that either he and the killer are one and the same OR that, for reasons unknown, he's lying about not seeing the car OR, as I've said, he's on some sort of drugged out trip.

The doctor's whole purpose as a character seems to be to distract, mislead, or downright tell lies (you have to figure out which). I seriously wonder how he ever got to be a doctor and...if his abilities have deteriorated since being licensed...how he maintains his practice. He seems more deficient than Dr. Watson in his worst Nigel Bruce mode until the very end when light suddenly dawns.

And a more personal grumble: Being a participant in the Medical Examiner Reading Challenge, one of my tasks when reading a murder mystery is to keep track of who's been killed and how. With all the body-swapping, it was incredibly difficult to keep track of the real victims and how they were really killed. ★★ and 1/2 (and that may be generous).

First line: There is one thing that is important, in all the dark mystery of tonight, and that is how that ugly little auburn-haired red-eyed man, with his torn ear and his sharp dog-pointed teeth, with his twisted corkscrew legs and his truncated height, and all the other extraordinary details about him, could have got away and vanished so completely from the face of the countryside after killing Inis St. Erme

Last line: Though I shall limp a little when I smell yellow roses and black rich garden earth, all through life.

Deaths = 5 (one strangled, two hit on head; one stabbed; one run over) [Rick, I've gone over it and over it and I think I've got the deaths I'm claiming straight....]

I didn't overly enjoy this one either and I had similar issues I think.