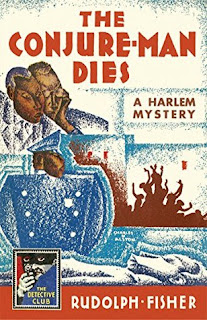 The Conjure-Man Dies (1932) by Rudolph Fisher

Set in Harlem, the story features the death of Frimbo, a conjure-man or fortune teller. But Frimbo was more--he was an African king who came to America, earned a degree from Harvard, studied philosophy and was proficient in science. He had a gift of observation (almost Holmesian) that allowed him to pick up little details about his clients--making his pronouncements about them and their circumstances seem magical. He makes his predictions in a room shrouded in darkness save for a bright light focused on the client. Frimbo is killed while he is in the middle of a consultation with Jinx, a somewhat surly man who refuses to tell the truth about anything on general principle.

His best pal, Bubber, runs across the street to summon Dr. John Archer who finds the victim with a head wound. But upon close examination he determines that the blow was not the cause the death. By this time the police, with Detective Perry Dart in the lead, have arrived and the first task is to determine exactly how the conjure-man was killed. And then they will have to sift through seven suspects to find the culprit. The plot is full of red herrings and twists. We have everything from the mysterious servant who has vanished, somewhat hidden passageways, a disappearing corpse, a man who comes back from the dead, a possibly not-so side plot with vengeful gamblers, and the burning of evidence in the middle of the night. And--an exciting finish to wrap it all up.

This is an absorbing book and an amazing one for the time period. Written by an African American author of the Harlem Renaissance and featuring an all African American cast of characters--from the victim to the suspects to the doctors and the police officers. Fisher gives us an insider's view of Harlem in the early 1930s. Not to mention that it is a cleverly constructed mystery with enough twists and turns to satisfy mystery readers of all sorts. I figured out part of the twisty plot--but the final reveal was a definite surprise. I've read that, had he not died much too soon after this was published, Fisher planned to write at least two sequels and I believe the mystery field is much poorer for his loss. This is quite a good book for a debut mystery and one can only believe that the follow-up stories would have been even stronger.  ★★★★

After all, a gentleman who turns out to be one of the suspects in his own murder case deserves a little personal consideration. [Dr. Archer; p. 208]

Then you couldn't have done it yourself. because if you had, you'd know who did it and it would be a simple matter for you to track yourself down and arrest yourself. Of course you might have done it in your sleep. [Dr. Archer to Detective Dart; p. 210]

Last line: And deep in meditation the two wandered on side by side down Seventh Avenue.

Deaths = 2 (one suffocated; one shot)