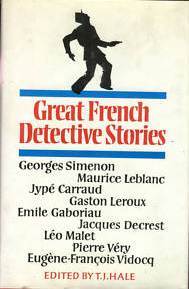 A selection of mystery short stories direct from France. It brings together more well-known authors such as Georges Simenon , Maurice Leblanc,  and Gaston Leroux as well as a variety of authors which most readers will be unacquainted with. It includes everything from detectives who share methods with Sherlock Holmes to those who have skirted the law themselves and now fight on the side of the angels. As with all collections, some stories are much stronger than others. My favorites include "Drops That Trickle Away," "Watch the Red Balloons," and "The Haulage Company." ★★★ for the entire collection.

"The Little Old Man of Batignolles" by Emile Gaboriau: This features a shrewd but compassionate private detective named Mechinet.  We have a Watson-like companion--a 23 year old health officer who lives in the same tenant house as Mechinet--and many points which put me in mind of the Holmes stories. The story opens with their meeting--and our narrator's attempts to discover what kind of man his neighbor is.  He realizes he has become friends with a detective when Mechinet is called out to investigate the death of a wealthy old man.  Everything points to the man's nephew--but our narrator is the first to call attention to a clue that will lead Mechinet to the truth of the matter.

"The Mysterious Railway Passenger" by Maurice Leblanc: Sometimes it takes a thief to catch a thief...and a murderer. Arsene Lupin is on the run from authorities himself and gets caught up in a robbery on a train. He winds up helping the police to effect the capture of a very dangerous criminal.

"Drops That Trickle Away" by Maurice Leblanc: Jim Barnett investigates the mystery of the intruder in Baroness Valerie Assermann's boudoir--an intruder who, though he made noise and left clues in the room, left no traces of how he got in or out and seemed to have taken nothing. But when her priceless pearls are proven to be mere substitutes, she isn't certain that she wants Barnett to finish the investigation.

"The Mystery of the Four Husbands" by Gaston Leroux: An interesting mystery about a woman who marries several men--all of whom meet tragic deaths. Is she a murderess...or is someone else behind the deeds?

"Storm over the Channel" by Georges Simenon: The story sees now-retired Superintendent Maigret setting off with his wife on holiday to England. But a storm in English Channel prevents their crossing and they take refuge in boarding house. Maigret finds himself on something of a busman's holiday when the maid is found shot to death after helping one of the other boarders carry luggage down to the boat. The local detective thinks the retired policeman may be past it, but Maigret soon proves that he can read clues in a menu with dress measurements doodled on it. It isn't long before the detective has a confessed murderer in charge. This is straight deduction and Maigret makes the most of the few clues he finds.

Quote:
"It must have been a crime of passion....That girl was a really fast one. She was always hanging around the dance-hall at the far end of the harbour."  "Well, that makes it different," murmured Madame Mosselet, who seemed to think that if passion was involved the whole thing was natural.
"The Amethyst Fly" by Jacques Decrest: Superintendent Gilles is looking for the killer of a young woman known to associate with a Chinese man. His interest is aroused when his friend introduces him to a young woman who served as a secretary to a blind Chinese man for six weeks. But what is about her story that so interests him?
"Watch the Red Balloons" by Pierre Very: Prosper Lepicq, a young barrister-detective, becomes involved in the inexplicable death of the man with the red balloons. Old Beauregard is an eccentric man often seen wandering about with red balloons. He is found dead on the snow-covered moor--his throat has been cut, there is no weapon to be found, and there are no footprints in the snow...not even his own. The authorities think Lepicq is a bit crazy when he believes the red balloons hold a key to the mystery.
"The Lady of the Museums" by Pierre Very: Jules Moulinet had been a bank clerk. He is found hanged with a five hundred franc note clutched in his hand--and the remains of burned notes in fireplace. Then the artist who designed the newest run of five hundred franc notes is found shot. Prosper Lepicq is on hand to explain all.
"For Piano & Vocal Accompaniment" by Jype Carraud: M. Manneville finds himself in the clutches of a blackmailer. When that blackmailer is stabbed the prime suspect is, of course, Manneville. M. Snowdrop takes on his case and sets out to discover the truth.
"The Haulage Company" by Leo Malet: Andre Pellerin's death has all the hallmarks of suicide--until private detective Nestor Burma teaches the perpetrator of the "perfect" crime something about perfectionists.
"The Cheek of Judas" by Eugene-Francois Vidocq: A former agent of the Prefecture thinks he's pulling the wool over Vidocq's eyes. But Vidocq knows a wolf in sheep's clothing when he sees one.
First line (first short story): Some three or four months ago, a man in his early forties, correctly dressed in black, called at the office of the editor of Le Petit Journal.
Last line (last short story--names redacted to prevent spoiling): As may be imagined, [redacted] did not escape lightly, [redacted] and [redacted] were arrested the same night, and all four of them were eventually sent to the galleys.

I would LOVE to read this. I don't believe I have ever read a French mystery.