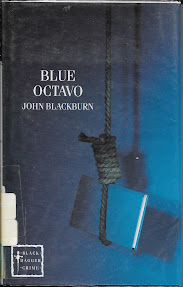 He was seventy-eight years old with forty thousand pounds' worth of stock in the basement of his Chelsea shop, but the thought of a good buy slipping through his fingers was a constant nightmare that troubled his sleep; rows and rows and miles and miles of books running away into other people's shops and catalogues, and not a single volume for poor old Jack Goldsmith. ~Blue Octavo (aka Bound to Kill; 1963) by John Blackburn

Bookseller James Roach had always been a bit eccentric, but after the latest auction his fellow bookmen think he's gone even further round the bend. Roach pays 43 pounds for an obscure but thoroughly unexceptional book on mountaineering which has never fetched more than 12 pounds on the open market. He can't possibly have a buyer who will pay him enough to make a profit. But Roach confides to his young friend, John Cain, that he does indeed have a buyer. He's positive that he has found an obsessive collector who--for reasons unfathomable--will pay extraordinary prices in order to be the only person in the world who owns copies of this limited-run memoir about the last climb of two brothers in 1909. Cain leaves him in his office that night with the book on the desk in front of him.

The next day Cain has reason to drop by Roach's office again and finds him hanging in his office. After hearing about the bookseller's odd behavior at the auction, the police write the death off as a suicide (thinking that he realized what a stupid mistake he'd made). When Cain tries to protest their findings, he's reminded that IF it is murder as he seems to imply then he would be topping off their suspect list. Because guess who is Roach's beneficiary under his will...you guessed it--John Cain. So maybe he should just accept their professional findings and go play with his new stock of books.

But as soon as he goes to Roach's office he knows he's right. The eccentric bookman did not commit suicide. How does he know? The book is gone. He goes through everything of Roach's--even the parts of the building where Roach lived and The Grey Boulders is nowhere to be found. Not only had Roach found someone willing to pay exorbitant prices for the book, that someone has now become desperate enough to kill for it. As he begins to investigate his friend's death on his own, he joins forces with Julia Lent and (more reluctantly) author Molden Mott. Julia's uncle and Mott have both had their copies of The Grey Boulders stolen and the three are soon hot on the trail. Are they dealing with just a book collector gone made or is there a more sinister reason why the book must suppressed at all costs?

This short little mystery (about as long as the elusive Grey Boulders, I think) was quite fun. It gives a nice look at the inner world of booksellers and an interesting insight into the lengths we book collectors can go to get our hands on particular books. The mystery plot is solid with a motive that fits in with the extreme behaviors represented. A nice bit of action and adventure and the hero gets the girl in the end. What more could you want in a day's read? ★★★ and 1/2.

First line: "And that, ladies and gentlemen, as the Duke said to the Duchess, appears to conclude our business for the day."

When you'd been as long in the trade as old Roach or Jack Goldsmith, books became a craze, an obsession...only books mattered to them and gave them security. Long rows of polished volumes stretching away under the light, the feel of a lovely binding, and the fun of finding a bargain. (p. 12)

Last line: She broke off as he came round from behind the desk, and there was nothing more to be said.

Deaths = 6 (one hanged; one drowned; one burned to death; two fell from height; one natural)

That book cover is quite intriguing. I am glad that you enjoyed the book because that cover is gonna inspire me to get it.

John Blackburn! How exciting to read a review of one of his books here, Bev. I am a Blackburn addict. I have many, many of his books. (And, if I may brag, I am responsible for his books being reprinted by Valancourt Books based solely on my write-up of Broken Boy). Blackburn rewrote and updated Blue Octavo with some added horror elements and re-titled it The Book of the Dead. It's been republished by Valancourt. You might want to read that one to see if you can notice any differences in the two versions.

Blackburn worked as bookseller for most of his life until his books became such big sellers he was able to quit and become a novelist full time. Three or four of his books were made into Hammer horror movies. He has written so many unusual thrillers -- adventure, horror, supernatural, weird sci-fi, espionage, eco-thrillers about terrifying viruses and diseases used as weapons, and a handful of whodunnits. Very unusual writer, highly imaginative. He's the kind of genre writer I only stumble across every ten years or so.

I think you'd like some of the books I've reviewed on my blog. Granted I usually write about the very out there, weird fiction books of his, but Broken Boy is one of the "milder" ones that you might find intriguing. The villains are a secret society of women and it has a vibe like the old Avengers TV series with Patrick MacNee and Diana Rigg.

Hi, John! I'll have to come take a look at your Blackburn reviews. I did enjoy this one very much--reprinted as you can see, by Black Dagger Crime. Anything with an Avengers vibe sounds good to me!