Death in the Clouds 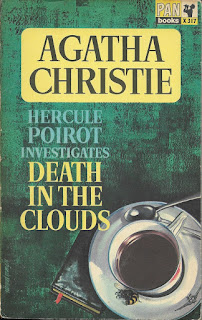 Death is waiting for one of the passengers who cross the English Channel on the air liner Prometheus. Hercule Poirot suffers from mal de mer and mal de l'air. So, he sleeps for most of the journey and someone murders Madame Giselle right under the nose of the airsick detective. The victim is a money-lender who backs her loans to the upper classes with a bit of judicious blackmail as security. Only rarely does anyone default on their loans when they know Madame Giselle will publish their darkest secrets.

At first, the steward thinks the Frenchwoman is asleep as well and leaves her alone until just before the plane will land. When he tries to awaken her, he discovers, to his horror, that she is dead! At first glance, it looks like she may have had a severe reaction to a wasp sting (there had been one flying around the compartment), but it soon proves to have been from a dart laced with an obscure snake venom. Then a blowpipe is found stuffed down by Poirot's seat--of all places! [Causing those at the inquest to believe "that little foreigner done it."] Some of Poirot's fellow passengers seem to fit the profile of Madame Giselle's clients, thus giving them a possible motive, but it seems impossible that any of them could have used the blowpipe to kill her within the small confines of the plane without being seen by at least one person.

Poirot has asked his friend Inspector Japp to get him a detailed list of what was in each passenger's pockets and carry-on baggage and he is quick to spot the essential clues. But he is also puzzled because although objects he expected to be found were found--they were among the belongings of the wrong person! Several trips to France and more interviews with all the passengers and the stewards will be needed as well as an interview with an as yet unsuspected person before the puzzle will make sense.

It hasn't been so very long since I read this one--but I'm attempting to read Dame Agatha in publication order and didn't want to skip over. She wasn't able to pull the wool over my eyes this time. I was rather proud of myself that I remembered all the little clues that Poirot picks up on so easily (and that I missed totally when I read this the first time). I still enjoyed myself and was able to sit back and observe the fun without spending time trying to work out whodunnit. A fun read. ★★★★

First line: The September sun beat down hotly on Le Bourget aerodrome as the passengers crossed the ground and climbed into the air liner Prometheus; due to depart for Croydon in a few minutes' time.

[about possibly being suspected for murder] After all, I suppose there is some point to it--I might be the person who murdered her! And when you've murdered one person they say you usually murder a lot more; and it wouldn't be very comfortable having your hair done by a person of that kind. [Jane Grey; p. 46]

Murder doesn't concern the victim and the guilty only. It affects the innocent too. You and I are innocent, but the shadow of murder has touched us. We don't know how that shadow is going to affect our lives. [Norman Gale; p. 51]

Nothing can be so misleading as observation. [Poirot; p. 72]

If there's one fellow after you, there's sure to be another. Seems to be a law of Nature. Sometimes it's three or four. [Gladys; p. 107]

There is no such thing as muddle--obscurity, yes--but muddle can exist only in a disorderly brain." [Poirot; p. 149]

I think it's always best to backup your money lending with blackmail! Great idea for a novel.