Money in the Morgue 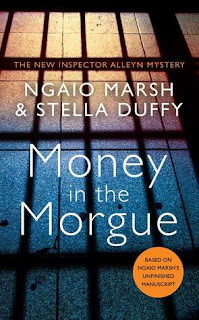 New Zealand. December 1942. Chief Detective Inspector Roderick Alleyn is undercover at Mount Seager Hospital, working on a top secret mission to uncover the meaning behind coded radio messages that have been intercepted. His cover as writer in need of rest and quiet for his nerves allows him to remain anonymous while waiting for sight or sound that will help him with his mission. One everning as a storm breaks over the hospital grounds, he finds that it never rains, but pours. A floodgate of mysterious events is about to be opened.

Mr. Glossop is the courier for the pay packets of various government establishments in the area. His elderly van busts a tire (as he has warned the powers-that-be it will for months) and he is stranded at the hospital for the night. Not that it matters much. The raging storm washes away bits of the bridge on the only available road--making the trip a dangerous prospect at best. Matron Ashdown insists that he deposit the remaining wages in the hospital's safe to spend the night safely tucked away with the hundred pounds winnings of hospital clerk Rosamund Farquharson (whose horse has proven lucky).

That same night, Sydney Brown, the grandson of an elderly man who has been on the edge of expiration for quite some time, has finally come to his grandfather's deathbed--just in time for the man's last moments. There is some confusion over getting word to Matron and the hospital porter, in what seems to be a drunken fit, pushes the trolley with the man in a body bag back and forth between the morgue and the office.

Meanwhile, a restless Mr. Glossop, cooped up in a hot, airless room decides he'd rather sleep with his cot lodged in front of the safe and moves to the matron's office. The entire establishment soon echoes with the courier's cries of "Thief! Robbers! Safe. Thief. Help! Thief. No!" after he finds the safe open and most horribly empty. Alleyn is forced to break cover and begin an investigation and the first thing he notices is that the body bag doesn't seem to be quite as full as it ought to be. Expecting to find the missing money bag, he (and all gathered round) are astonished to find that Mr. Brown's body is indeed gone, but it has been replaced not with stolen loot but with another corpse. Alleyn must get to the bottom of the theft, missing corspe, and murder, all while keeping an eye out for clues that will help him with his true mission at the hospital. He has one long night ahead of him and he deputizes Sergeant Bix, commander of the servicemen who are recuperating at the hospital, to act in the stead of his trusted friend Inspector Fox.

Continuation novels and brand new stories featuring beloved characters are almost always an iffy prospect. There have, of course, been a fairly good number of excellent Sherlock Homes novels written by others. But there has also been numerous really bad ones. I was thrilled when I heard that Jill Paton Walsh was going to used Sayers' source materials and give Lord Peter fans Thrones, Dominations and another chance to read about their favorite sleuth. That story was okay, but nothing like what Sayers would have given us herself. I've read all the others because I love Lord Peter and I kept hoping she'd get it more absolutely right (she never made it as far as I'm concerned). After reading reviews by bloggers I respected, I have completely ignored all of the Sophie Hannah novels about Poirot--I wasn't up to seeing Poirot through Hannah's eyes. The word on the blogging street about Money in the Morgue was generally positive, so when I found it would help me with one the reading challenges I'm doing I decided to give Duffy's rendering of Inspector Alleyn a try.

Overall, I found it to be an enjoyable book. The plot has a number of twists and turns and I can say that I did not see the finale coming at all. The new characters are interesting as are their interactions. I'm not quite sure that she got Alleyn right--particularly when he was interviewing suspects. I liked him best when he was interacting with Sergeant Bix. It definitely reminded me of Alleyn and Brer Fox. A random thought I had was on the naming of the sergeant. I'd be interested to know how complete the chapters Marsh left were and if all the primary characters were named as they appear in the final product. Whether Marsh left a complete roster or Duffy provided/changed any names, I also wonder if  Bix was a deliberate attempt to parallel Inspector Fox as the military man steps in as Alleyn's right-hand man for the investigation. Somehow, I think if the sergeant had held the moniker Bassington or some such polysyllabic or hyphenated surname then it wouldn't have been the same.

A major conceit of the book is a connection with A Midsummer Night's Dream. On the one hand, this rings true as the entire night's events have a very dream-like (though I think the participants may opt for nightmarish) quality. Everything happens in the dark and certain events seem to happen in slow-motion. There is also an almost fairy-like glow in the hidden cave that Alleyn investigates at one point. And Alleyn, of course, is known for quoting Shakespeare. However, I don't see a correlation between our characters and those in the play. Alleyn refers to himself as Puck--but that only works for me if you view Puck as the closest thing to a protagonist in the play. Alleyn certainly is not mischievous and the only "tricks" he plays on anyone is "playing" them (as he calls it) to try and get them to tell the truth about the night's events.

This mystery should work really well for those who like their detective fiction in the Golden Age style but may not yet know Marsh's detective. It definitely has the right flavor. It also works for those of us who aren't quite as picky about Inspector Alleyn as we are about other classic detectives (Lord Peter and Poirot) and don't mind if everything rings absolutely true or not. It has a good plot with surprises and provides a lovely view of the New Zealand countryside during the WWII years. ★★★ and 3/4...not quite a full four.

First line: At about eight o'clock on a disarmingly still midsummer evening, Mr. Glossop telephoned from the Transport Office at Mount Seager Hospital to his head quarters twenty miles away across the plains.

Last lines: He paused and set aside his pen. He would write from Aukland.