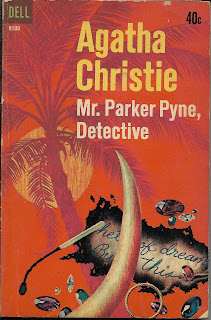 Are you happy? If not, consult Mr. Parker Pyne, 17 Richmond Street.

Pyne is not your typical detective (at least in most of these stories). As he tells one of his clients, "But my dear lady, you must remember, I am not a detective. Theft and crime are not in my line at all. The human heart is my province." Here he helps women retrieve the attention of straying husbands. He helps men who need a little adventure in their lives or wealthy women who are bored and need novel ways of spending their money. In a few cases he does solve murders or thefts, but mostly he is out do what he says--help unhappy people. These are perfectly fine, nice little stories but not heavy in the mystery department. ★★★

"The Case of the Middle-Aged Wife": Martha Packington is distraught. Her husband has begun going about with a young typist from the office. Tears and recriminations do no good--since he says he's only bringing a little happiness to the poor girl and there's nothing it. Not knowing where to turn, she spies an advertisement from Mr. Parker Pyne offering to help those who are unhappy. He shows her that what is sauce for the gander is also sauce for goose...

"The Case of the Discontented Soldier": Major Charles Wilbraham is finding life in England very dull after a stint in East Africa. He goes to Parker Pyne who promises him that there are adventures a-plenty in England for those who know where to look...The major soon discovers that Pyne was right.

"The Case of the Distressed Lady": Daphne St. John comes to Parker Pyne distressed. She shows him a diamond ring and says that she had stolen it from a friend because she had gotten herself into debt. Circumstances have occurred that have cancelled her debt and she wants to get the ring back where it belongs--but her husband and the friend's husband have had a falling out and she can't do it. Can Parker Pyne arrange things? He can...more than she knows.

"The Case of the Discontented Husband": A different twist on the "spouse is interested in someone else" story (as per "Middle-Aged Wife"). And Parker Pyne learns that he's not infallible.

"The Case of the City Clerk": Mr. Roberts's wife and children are away on holiday and he's feeling at rather loose ends. He's not unhappy exactly...but he'd like a bit of adventure just once. Parker Pyne is happy to oblige him.

"The Case of the Rich Woman": Mrs. Abner Rhymer is a rich widow who come to Parker Pyne for advice on how to spend her money. She's got all the jewels and furs and houses and cars that she wants. She doesn't want to give her money away but she can't think of anything else she wants or needs. She wants to find a way to be happy again. Pyne promises to do just that...but in way she never expected.

"Have You Got Everything You Want?": Elsie Jeffries boards the Orient Express to join her husband in Constantinople. Parker Pyne is also on the train and shares her dining table. As they talk she asks if he's the Parker Pyne of newspaper ads. When he confirms this, she tells him she's worried. She found a scrap of her husband's writing on a blotting pad that indicates that something will happen just before the train reaches Venice. Pyne agrees to help her and when a smoke bomb creates a diversion during which Elsie's jewels are stolen it appears that he has failed. But all hope is not lost--he's able to solve the crime and get the jewels back to her by the time they're in Constantinople.

"The Gate of Baghdad": For the first time Parker Pyne is called upon to solve a murder which takes place on the motor coach he and other travelers are taking from Damascus to Baghdad. Captain Smethurst had muttered vague comments about not letting down a pal before he's found stabbed at the back of the coach. A chance conversation between he and Pyne prior to the journey leads our hero to the solution.

"The House at Shiraz": Lady Esther Carr is thought to have gone mad. She's given up her English ways and insists on staying in the Middle East and dressing in Eastern garb. Her servant has died from a fall from a balcony and since then she has refused visitors from her home country. But she sees Parker Pyne and he gets to the bottom of her true unhappiness.

"The Pearl of Price": While visiting an archaeological dig, Carol Blundell, daughter of an American millionaire, loses a valuable pearl earring. It looks like someone in their small group has taken it? But who? Leave it to Parker Pine to find out.

"Death on the Nile" (a precursor to the novel of the same name): A complaining, wealthy woman approaches Parker Pyne for help. She believes she is being poisoned by her husband and wants Pyne to prove it. When does die of poison, he points the finger of suspicion at someone else...

"The Oracle at Delphi": The wealthy Mrs. Peters is traveling with her son. When the young man is kidnapped and ransom is demanded, a man introduces himself as Parker Pyne and offers to help her. Pyne does...but not quite in the way she believes.

First line: Four grunts, an indignant voice asking why nobody could leave a hat alone, a slammed door, and Mr. Packington had departed to catch the eight-forty-five to the City. (from the first short story, "The Case of the Middle-Aged Wife")

Last line: "I am Mr. Parker, Pyne," explained the gentleman. (from the last short story, "The Oracle at Delphi")

Deaths = 4 (one stabbed; two poisoned; one fell from height

The Pyne as you say are not really to be read for their mystery component, though Pyne's business certainly creates an interesting setup for a crime story. I think the stories are more interesting for other reasons, in what they say about happiness, wealth, fiction vs reality and society at the time. On that score I think there is lot to gain from them. I wonder what it might have been like if Christie had written a novel featuring Pyne.

Yes, a novel-length Pyne story would be interesting indeed.

I read these ages ago when I was a teen and I loved the idea. "The Love Boat" was popular on TV way back then and I got the idea that this was a sort of detective fiction version of Love Boat episodes.

Doesn't Mrs. Oliver show up in one of these stories? She's hired by Pyne to write scenarios and they discuss the affair afterwards. It's the one where the man is aching for adventure ("...Discontented Soldier" maybe?). He and a woman get kidnapped, tied up in a cellar and subject to a death trap. Does water pour in on them? Anyway, I loved that self-referential cameo. I had read Cards on the Table prior to the Parker Pyne stories so I knew about Mrs. Oliver.

There is a book called Tracer of Lost Persons (1906) by Robert Chambers which is essentially the same idea. Mr. Keen hires himself out as a "happiness consultant" sometimes acting as a private eye when a crime is involved. But the stories are basically about resolving unhappiness for the lovelorn. I wonder if Christie was inspired by those stories. They were turned into a long running radio series that lasted form 1937 to 1955 but I don't know if it aired in the UK. It was also a TV show, I think, in the 1950s.

I always wanted more of him.