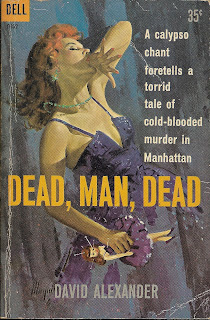 Romano surveyed the scene and shook his head despairingly. "Why don't they give me nice, easy murders, like when some guy cuts another guy's throat in front of a couple of dozen witnesses?"  he asked. "In this case you can't tell the dead bodies from the dummies." Dead, Man, Dead (1959) by David Alexander

Bart Hardin is a hardworking newspaperman who never takes a vacation. Not because he's a hard-working newspaperman....but because he also tends to gamble and his money goes out about as fast as it comes in. But his girl Carole Ann Lee takes a week's cruise to the Bahamas with her uncle and he decides that maybe a vacation will be good for both of them. While on the ship, they meet some interesting characters--including King Pegleg, a Calypso musician; Anton Maschek, a performer with two very bizarre wooden dolls; and Mrs. Rutherford Barnes, a British subject from Nassau who has never been to England but who tries to out-British the Queen. Bart and Carole Ann little realize how intertwined their lives will be with these people once they return to New York.

At dinner on the evening before they return to dock at New York, there is an incident with one of Maschek's wooden dolls and early the next morning Carole Ann sees the man throw the thing overboard. Given how protective he had been of the dolls previously, she thought it very odd and it almost seemed to her like he was drowning the dummy. When Maschek realizes he's been observed he flashes a malevolent look at her before rushing below to his cabin. Later at the dock, she and Bart see him talking with a dock worker in a bright red sweater. They also see Mrs. Barnes in conversation with a well-known gangster

And now things really start happening. Red sweater manages to follow Carole Ann and is ready to kill her when a delivery man interrupts him. Red sweater then disappears for much of the book. King Pegleg begins speaking in Calypso rhyme about murders that will happen...or that have already happened but not yet discovered. Several deaths do happen and it looks like Pegleg might be a killer...at least that's what Bart's friend Lieutenant Romano thinks. Bart is convinced Pegleg is innocent even though he may know more than he's telling. But is red sweater the real killer or is someone else behind it all? And will Bart and Romano find out in time to prevent a second attempt on Carole Ann from being successful?

This was my first read by David Alexander. Bart Hardin is definitely a character to like and now that I've read what looks like the last of the eight books which feature him I need to find the earlier books and read those too. A book of the 50s, it's not focused a great deal on puzzle plot--it's immediately obvious what's going on with Maschek and his dolls, for instance. But there are some good detective moments amidst the more action-centered adventure and there is a wrap-up scene between Bart and Romano which is very reminiscent of Golden Age summations. Overall, a fun afternoon's read with a nice Calypso beat. ★★★

First line: The night shadows crawling over New York's waterfront were dark-furred animals on the prowl for prey.

I was unable to come up any info on this David Alexander. There are at least one other author(s) with the same name, but too young to be publishing in 1959. - Rick