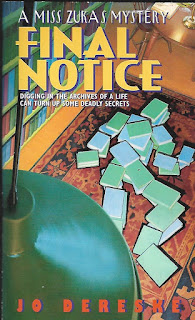 Final Notice (1998) by Jo Dereske is the sixth mystery starring librarian Helma Zukas. Helma is an orderly, methodical lady whose life is about to be turned upside down. Her favorite aunt--Aunt Em--was due to arrive in a week or so for a visit, but plans change when Aunt Em has a "brain incident" and can't be released from the hospital to be alone at home. Helma volunteers to have Aunt Em come and stay early. From the moment Aunt Em arrives at the Seattle airport, life gets complicated. Someone tries to run off with her luggage. Then someone tries to steal her purse and she stabs him with a hatpin--three times.

That night they hear two men arguing outside Helma's apartment. The police are called, but they all (Helma, Aunt Em, and Helma's fried and sidekick in mysteries Ruth) go outside to see what's up...only to find a dead body. Aunt Em declares that the man is the same one who tried to steal her purse and, sure enough, when his arm is examined there are three small holes. When they return to the apartment, they're horrified to discover that Aunt Em left the door open behind them and someone took advantage of the moment and ransacked the place. Someone is very determined to find something that Aunt Em has--but who? And what are they looking for? And why did they follow Aunt Em all the way to Washington to look for it?

SPOILERS AHEAD!! Read at own risk.

The Miss Zukas mysteries are cozies with just a bit of bite to them. In this particular outing, we find out that Aunt Em (who is in her 80s) had ties to Chicago gangsters and the villain after her possessions isn't just playing at cops and robbers, he'll take her out to get what he wants. Of course, being a cozy, it isn't full of blood and gore and the only death is not described in much detail--but there is a nasty air of menace.

It was nice to revisit this series (I had read several of them from the library when they first came out) and I always enjoy a good mystery that has libraries or books or anything of that nature at its center. Helma is an interesting character and the regulars who surround her (Ruth and Police Chief Wayne Gallant as well as the other employees at the library) are all well-defined and interesting as well. ★★★

First line: On Thursday afternoon, when the phone call came, Miss Helma Zukas was refereeing an argument between two Bellehaven Public Library patrons who each accused the other of hogging the internet.

Last line: "I'd be delighted," Helma told him.

I’m a retired librarian and I’m picky about library mysteries. Sometimes I can’t get past lousy librarianship, I’m looking at you Aurora Teagarden. Miss Zika’s is the best. She loves what she does, is curious, driven to help people and endearing in her stereotype. Plus the hint of romance. Miss Zika’s is wonderful.