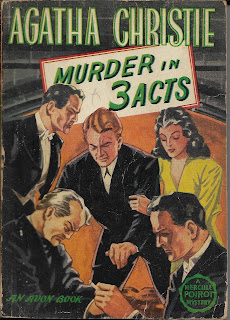 Who would want to poison a harmless, truly nice vicar? That's the problem before us in Christie's three-act murder mystery. In the first act, thirteen guests, including celebrated detective Hercule Poirot, are gathered for dinner party at the home of retired actor Sir Charles Cartwright. It is a fairly eclectic group from our famous detective to a rather plain playwright; from a beautiful dress designer to a genteel lady in reduced circumstances; from the lady's daughter and her left-leaning young man (or is he hers?); from a famous nerve doctor to a racing gentleman; and from the vicar and his wife to Mr. Sattherwaite--observer of the human condition. When the Reverend Stephen Babbington succumbs to the temptation of a cocktail, a beverage he is unaccustomed to, Mr. Sattherwaite is amused to see him wrinkle up his nose at the first taste and then bravely go on to sip it. But no one is amused when the vicar chokes, goes into convulsions, and dies. There is a bit of unease at the sudden death--and Sir Charles and "Egg" (Hermione) Lytton-Gore (daughter of the impoverished lady) are sure that murder has been done. But an analysis of the vicar's glass has negative results. Even Poirot thinks they are making a drama of nothing.

But then the second act takes place and Dr. Bartholomew Strange (the nerve specialist) holds a dinner party with a similar guest list to that of Cartwright's. It also ends in death. This time it is the host, Dr. Strange himself, who dies after drinking an alcoholic beverage. Again, there is nothing in the glass--but this time a post mortem is performed and it is established that the doctor died from nicotine poisoning. Our amateur sleuths, Sir Charles and Egg--with Mr. Satthewaite in tow, begin detecting in earnest. They reason that the doctor must also have suspected foul play in the vicar's death and, when he found something out (but what?), he was put out of the way too. Sattherwaite makes sure Poirot is aware of the second death and soon the team is gathering clues and working out theories. But only Poirot will be ready to reveal the killer when the curtain raises on the third and final act.

I don't think I've ever read this particular Agatha Christie. I didn't own a copy until 2014 and I missed logging it if I read it from the library back when I first discovered her mysteries. But I had seen the adaptation with Peter Ustinov as Poirot and I did remember the basic plot (though not the motive). As far as I recall, there weren't many changes in the filmed version--other than location and the fact that Poirot shows up more frequently a lot sooner than in the novel. There's a good portion of the book where you wouldn't know that it was a Poirot novel at all. I spent my time reading waiting for Poirot to really get involved and for our detectives to realize who was really behind it. Also--looking for clues that would tell them (and the reader) who really did it if they were paying proper attention. And I think I caught them all--well done, me. It made for an interestingly different reading experience. That's not to say I haven't reread Christie before and gone in knowing who did it. I have. But this time I was reading for the first time and still knew who did it. Not one of my all-time favorites, but a solid performance from one of our queens of crime. ★★★ and 1/2

First line: Mr. Sattherwaite sat on the terrace of Crow's Nest and watched his host, Sir Charles Cartwright, climbing up the path from the sea.

The great merit of being a doctor is that your are not obliged to follow your own advice. (Sir Bartholomew Strang [doctor]; p. 14)

Last line: "It might have been me," said Hercule Poirot.