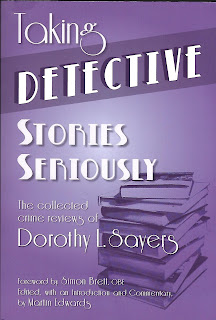 This is an absolutely delightful collection of reviews by a most erudite and witty practitioner of the art of writing detective novels. Sayers managed to give the full flavor of the books reviewed without giving away the plots. Having written intelligent and literate mysteries herself, she was well able to spot good writing and good plotting. She was on the whole a quite fair and even-handed reviewer, showing no favoritism to her colleagues from the Detection Club--and quite willing to call them out for their shortcomings. But she did so without being mean or snide about it--she simply expected writers (or anyone for that matter) to do their best job of work and that when they didn't they should take criticism and learn from it to do better. It did seem that she endeavored to find at least something about each novel that was good. Readers will know that when she could not find one positive point to highlight then the book must have been a real stinker. And when she was delighted with a mystery she had absolutely no difficulty singing its praises and telling readers to run out and get a copy.

It was very pleasing to see find that Sayers reviewed many novels that I have already read and even more pleasing that her estimations of several of them corresponded with my own reading. There are also a fair number that are sitting on the TBR shelves waiting to be read. It will be interesting to see how many of those I read with the same enthusiasm (or not) as she did. The most difficult thing about having this book is I now have a whole new list of mysteries that I would love to get my hands on and which are most likely impossible to find...or if they are to be found (I've checked on a few...) then they are way out of my price range. Fortunately several publishers have taken to reissuing some of these classic stories and authors such as E. R. Punshon and Christopher Bus are more readily available for more reasonable prices.

This is a book that I will return to again and again. Both to check my reactions against Sayers' and to be sure that I've not missed any gems that I need to go prospecting for. ★★★★★

Some of Sayers observations:

[on the frequency of murders in the library] I am getting rather nervous about my library. True, is on the first floor and had no french windows; moreover, I am not a millionaire financier, and so far I have unearthed no example of a female victim's being found murdered in a library; but there is no doubt that these places are fraught with the utmost peril. The young man in the The Grouse Moor Mystery went out with some friends to shoot grouse in a fog, which was foolish of him. He escaped, however, with a charge on No. 6 shot in the arm. But a day or two later he went into the library to write a letter. From this death-trap there was, naturally, no escape...

[about the books on review 21 October 1934] All our four books this week have readable qualities of one kind or another, though none of them (to quote the words of a certain American editor about some short stories by your humble servant) makes me want to roll about on the floor and bite the carpet with excitement. But, indeed, few books have that effect on the hardened nerves of British readers.

I feel that Skin and Bone rattles the bones a little hollowly. And I am worried by the plot.

[about the characters in an American novel] You simply wouldn't believe how dreadfully these bright young people in American society do go on. Drink, drugs, passion, blackmail, nothing comes amiss to them, and when they are feeling really worked up they play backgammon with their lovers on boards of lapis and malachite with jade and ivory markers.

Inspector Richardson...has to investigate the death of a detective novelist who is found with her head in a gas-oven just after a publisher has accepted her first novel on favourable terms. Rightly supposing that no one would commit suicide under such circumstances, he puts in some of that excellent, sober, straightforward detective work which he so well knows how to do....

As soon as [Mystery Villa by E. R. Punshon] came into my hands I hastily turned over the pages to see if it contained plenty of Superintendent Mitchell--a gentleman for whom I cherish an uncontrollable passion.

[about a really bad academic mystery] But the book's one inexcusable fault is nearly 300 pages of excessively dull, bad writing--the one sin which can and should never find forgiveness.

Glad you enjoyed this one too. Sayers is definitely good at reviewing humorously.

Oh, yes, definitely enjoyed this. Should have gotten 'round to reading it sooner.

A delightful review for a delightful book. I am always on the lookout for hidden gems such as these, thanks a ton for spotlighting this!
~ Lex (lexlingua.co)