Bodies from the Library: Lost Tales of Mystery & Suspense from Agatha Christie & Other Members of the Golden AgeFir 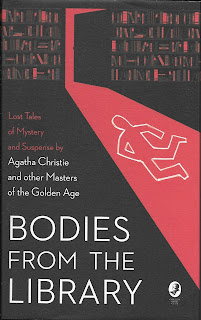 Bodies from the Library: Lost Tales of Mystery & Suspense from Agatha Christie & Other Members of the Golden Age (2018*) by Tony Medawar (ed)

A delightful anthology of short stories and screenplays from the Golden Age of Detection--stories that have either never been published before or only once upon a time in newspapers or magazines. Of particular interest (to me) are the earliest detective story by Georgette Heyer, and stories by A. A. Milne, Arthur W. Upfield, and Vincent Cornier. It was wonderful to have more to read by Heyer and Milne (I thought I had read all their work) and Vincent Cornier was a brand-new author for me. I will say that I had feelings of deja vu with the stories by John Rhode and Agatha Christie--even though these have supposedly never been collected before, I definitely had the feeling that I had read these. The Anthony Berkeley story reminded me of Christie's thrillers with young couples (the Beresfords and Bobby Owens & Lady Frances [Frankie] Derwent...etc.). A lot of fun. Overall, an enjoyable collection and I look forward to reading the second and third anthologies. ★★★★

"Before Insulin" by J. J. Connington: Squire Wendover asks his friend Chief Constable Sir Clinton Driffield to help him determine the legitimacy of an unexpected will.

"The Inverness Cape" by Leo Bruce: Sgt. Beef must figure out who bought the second cape and murdered a harmless old woman--in full view of her sister.

"Dark Waters" by Freeman Wills Crofts: A man thinks he has the perfect plan for undetected murder--but fate and Inspector French have other ideas.

"Lincke's Greatest Case" by Georgette Heyer: Top secret submarine plans (it's always submarine plans...) are copied and sold to the Germans, but it appears that no one could have done it. The Yard's brightest young detective, Roger Lincke, is put on the case to find out where the leak is.

"Calling James Braithwaite" by Nicholas Blake: James Braithwaite hires Nigel Strangeways to "keep his eyes open" but doesn't have a chance to tell him just what for before he's thrown overboard from the ship that bears his name. Did the escaped psychiatric patient do it? Or is the killer closer to home?

"The Elusive Bullet" by John Rhode: Robert Halliday has an argument with his (he hopes) future father-in-law. The the man is found shot to death on a train that Halliday himself has traveled on--with a firearm. Inspector Hanslet thinks he has his man--but Dr. Priestly isn't so sure. And when the Halliday's prospective bride comes to him for help, he decides to investigate to be sure.

"The Euthanasia of Hilary's Aunt" by Cyril Hare: Money runs through Hilary Smyth's hands like water. He thinks he's gotten onto a good thing when he makes the acquaintance of his not-long-for-this-world wealthy aunt. But Aunt Mary is definitely on to him.

"The Girdle of Dreams" by Vincent Cornier: Poor Mr. Blayne. An elderly woman approaches him at his jewelry establishment with a fabulous golden girdle. Despite her refusal to give its provenance, he's persuaded to keep it and show his partners for their opinion of the matter. Before he knows it, he's in a dream-like state; he has opened the safe; and the lady has disappeared with the girdle and a mass of jewels that aren't hers. The police doubt his story, but Professor Wanless believes it absolutely and soon brings the miscreant to justice.

"The Fool & the Perfect Murder" by Arthur W. Upfield: A man in the outback thinks he has committed the perfect murder to mystify the police. He doesn't know that when Detective Inspector Napoleon Bonaparte is put on a case perfect murders are no longer mystifying.

"Bread Upon the Waters" by A. A. Milne: Another young waster who loves money but not work, tries to figure out the perfect way to get rid of a rich uncle. He fastens onto the idea of committing a separate, unrelated murder first and somehow getting uncle's death hooked up with that--of course, he, the young waster, will have no motive for the first murder and the police will go looking for somebody else. But as so often happens with these things...there's just one little hitch in the plan.

Quote: Perhaps since eleven o'clock that same evening surprises had ceased to exist for Veronica.

"The Rum Punch" by Christianna Brand: Sgt. Troot, eager for his holiday in four days' time, goes up to the Hall to manage parking for a big event--only to find himself landed in the middle of a murder case. Will he be able to clear it up in time to head to the beach?

"Blind Man's Bluff" by Ernest Bramah: Max Carrados is deputized to guard a young American carrying secret plans. He'll have to outwit a cunning crook and a master of ju-jitsu to keep the plans safe.

"Victoria Pumphrey" by H. C. Bailey: Victoria Pumphrey is the last, impoverished Pumphrey in a long line of Pumphreys. She's been wasting her talents as a typist in a lawyer's office when an opportunity for investigation and adventure is provided. She naturally takes advantage of it and helps the last scion of another landed family.

"The Starting-Handle Murder" by Roy Vickers: "And I would have gotten away with it, it weren't for that meddling Department of Dead Ends."...and a gentlemanly feeling that I can't let someone else hang for my crime...

"The Wife of the Kenite" by Agatha Christie: Herr Schaefer is a German who made it through the first World War and headed to South Africa where his plans go off the rails because of Revolution. He thinks he's going to make it through this latest bloodshed...until he finds that revenge is sometimes a long time coming.

First line (from "Before Insulin"): "I'd more than the fishing in my mind when I asked you over for the weekend," Wendover confessed.

Last line (from "The Wife of the Kenite"): "This is the day in which the Lord hath delivered mine enemy into my hand..."