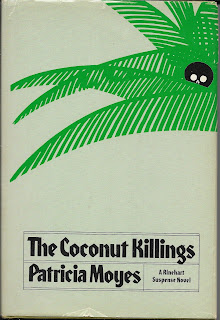 Friends of Detective Chief Superintend Henry Tibbett and his wife, Emmy, decide to retire to the idyllic Caribbean island of St. Matthew's (mythically located in the British "Seaward" Islands). They've just got their pub and inn up and running when their young bartender is accused of murdering a United States senator in a brutal machete attack. The Colville's are convinced that Sandy Robbins couldn't have possibly have committed such a cruel crime and beg Henry to come to the island and straighten matters out.

Of course, he can't do so without proper authority, but that soon comes. A previous assignment saw him in the area and, as he has experience in the Caribbean, his superiors think he's just the man for the job. It isn't long until it becomes clear that Sandy is a convenient scapegoat and the wealthy British who oversee most of the island just want someone official to rubberstamp the "investigation" and prove them right. But that's not the way Henry Tibbett works--especially when his "nose" tells him there's more going on than racial unrest. Sure, the black revolutionary movement seems ready to take advantage of the situation, but everything indicates that Sandy wasn't part of the movement. So, why was the senator killed? And, if Sandy didn't do it, then who did?

A second brutal slaying and a kidnapping leads Tibbett to look for clues in--of all places--New York City, which in turn leads him to a hide-out deep in the island's rain forest. Everything he uncovers seems to point corruption springing from important political and economic sources. But he still needs to find the person behind it all...before racial unrest turns into a full-blown revolution.

This is a decent, quick read. The mystery plot is serviceable and the primary characters are well-drawn (some of the secondary, revolutionary characters less so). But it does miss a certain something. In the mysteries I've read by Moyes, I find that I much prefer Henry Tibbett when he stays in Europe. The Caribbean background is not Moyes' forte--as I note in my review for Black Widower (where Tibbett got his much-valued experience in the tropics). This outing fares a bit better in my ratings simply because I don't think the clues are quite so obvious. At least we're not hit over the head with them as in Widower. ★★★

First Line: My dear Emmy, This is to let you know that John and I finally succumbed to your propaganda and went to the Caribbean for a holiday.

Last Line: And he handed Derek Reynolds a yellowing envelope, with a Tampican postmark franking an oblong, purple four-penny stamp.

" I much prefer Henry Tibbett when he stays in Europe." I feel the same way when Kathleen Moore Knight's Elisha Macomber (a Yankee of fictional Penberthy Island, Massachusetts) makes an occasional foray into Central America(!) where he is definitely out of his element; although he does manage to cozy up to the locals and get the job done.

Yeah--Henry gets the job done too. I just don't think Moyes writes as well about him when he's not where he belongs.

True. Just because the *author* goes on vacation doesn't mean the *detective* has to!

For some reason, the cover made me giggle.

Ryan: It is kind of funny...the coconut appearing to have eyes and looking at us. :-)