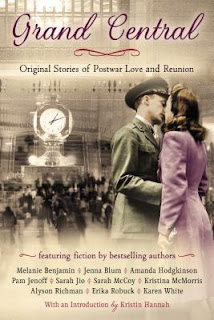 A collection of ten stories from various authors with an anchoring point of Grand Central Station in NYC and brief moments in each story that link it with another in the book (a couple briefly noticed in one story become central in another and so on). All of the stories revolve around the relationships and meetings that occur just after World War II has ended. There are joyful reunions and sad or angry meetings. There are chance encounters and moments when new lovers might meet for the first time. There are those who have lost making painful journeys to grieve and families that think they will get back together but will be disappointed. The stories are beautiful and touching; poignant and sometimes heartbreaking--but they are almost all wonderful. They evoke the time period and the uncertainty of feelings of that turbulent but (mostly) happy time.

My favorites include the very first story in the collection, "Going Home," in which a violinist and a dancer--both of whom have escaped the worst of the war for Jews--find each other through the music he plays in Grand Central. Another favorite is "The Reunion" which features the brave women pilots who helped the war effort. Virginia and Millie were as different as could be and started out as antagonists but became fast friends. When Millie is killed flying a plane that Virginia should have taken up, Virginia has a difficult time recovering from her grief until she makes a journey through Grand Central to Millie's home town. And the final story, "The Harvest Season" is lovely for the way it shows how people on the home front did what they had to do to make sure their soldiers still had a home to come home to. The only story that really didn't connect for me was "The Kissing Room" about a young actress who goes to Grand Central to meet a man who has represented himself as talent scout for MGM. I really didn't see the connection with the war theme and the ending is way too ambiguous--is he for real? And what kind of test is he going to make her pass? It just didn't sit well with me. Take that story out and it would be a five star collection for sure. As it is....★★★★

First lines (from "Going Home" by Alyson Richman): He wasn't sure whether it was the vaulted ceilings or the marble floors that created the building's special acoustics. But on certain afternoons when the pedestrian traffic was not too heavy, Gregori Yanovsky could close his eyes, place his chin on his violin, and convince himself that Grand Central Terminal was his very own Carnegie Hall.

Last line (from "The Harvest Season" by Karen White): And I pondered how sometimes the best secrets are those that are never told.

I know Melanie Benjamin and Karen White's work, and love their writing. I've also read Pam Jenoff but I wasn't all that impressed. I don't know any of the others, but this sounds like it could be a good collection.

Davida: I hadn't read any of these authors before and I really enjoyed the collection overall.