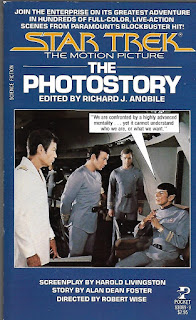 In the 1970s--before VCRs were common in most homes, twelve Star Trek fotonovels were produced, giving fans a chance to "watch" some of their favorite episodes again and again. Then when Star Trek The Motion Picture was released in 1979, Pocket Books produced another high-quality photostory of the movie. It tells the story of the mysterious, powerful force on a beeline course for Earth--destroying Klingons and a Federation monitoring station along the way. As per usual, the Enterprise is the only starship in range and then Admiral Kirk becomes a Captain again to meet the threat head-on. The Enterprise crew discovers that the threat has its source from Earth and must find a way to give V'ger what it wants before it destroys its home planet.

The photostory is beautifully put together and lovely to read. It does leave out a few moments that I'd looked forward to seeing, but overall it was a delightful look at a Star Trek movie I haven't watched for quite some time. ★★★★ 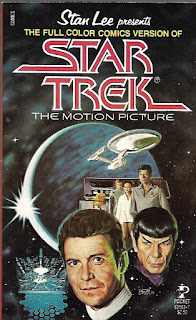 Marvel Comics efforts to capture the movie in comic book form. It's a novelty to own and the graphics are typical of the comics of the early 80s. It manages to both include more of the story than the photostory book released at the same time and add a few bits that aren't exactly true to the final version of the movie--perhaps it was made from an earlier script? I enjoyed this, but not quite as much as the photostory. ★★★