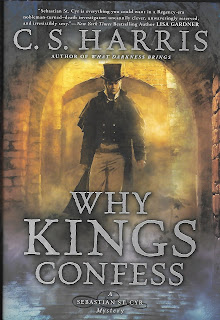 Regency England, January 1813: A Frenchwoman from Sebastian St. Cyr's past is found badly injured beside the body of the Dr. Damion Pelletan in the Cat's Hole, a lane in one of London's worst slum areas. Sebastian is brought into the case because his friend, surgeon Paul Gibson, was the one who stumbled upon the couple and he wants Sebastian to find out what happened and why. The woman has suffered a horrible blow to the head and the man...well, he was stabbed in the back and then someone removed his heart.

When the woman, Alexandrie Sauvage, regains consciousness, they find that she remembers little of the attack and can offer little help in tracking down the culprit/s. But she (and Sebastian) definitely remembers the brutal betrayals of wartime that she experienced with Devlin. Neither trusts the other--she because he is Lord Jarvis's son-in-law and he because he feels she's just as much to blame for certain deaths in Spain as he is. He's also quite sure that she isn't telling him everything she knows...and he's troubled by the relationship that seems to be developing between Alexi and his friend Paul.

Working in the dark (sometimes quite literally), Sebastian learns that Dr. Pellatan was tied to a secret French delegation tasked with approaching the British about the possibility of an end to the long-running war between the two countries. Is someone trying to sabotage the mission? It certainly appears that way when other members of the delegation are killed as well. Jarvis is said to oppose a settlement with Napoleon--could he be behind it? There are also members of the exiled French royal family in England. Could the deaths be related to a plot to retake the French throne? But then there are also a few more personal victims in the ever-mounting body count--is the motive related to secret passions and revenge? Sebastian needs to find out before the danger he skirts on a regular basis reaches those he holds most dear.

One thing I really enjoyed about this story was the focus on Paul Gibson. While Sebastian and Hero are great characters and I am interested in following the development of their life together, we haven't spent a lot of time with Paul other than his reports to Sebastian on the various post mortem examinations he's done. This entry in the series shows more of Paul's struggles with pain (from the loss of his leg in the war) and it gives him a budding romantic relationship which I hope to see develop more fully in the future. He has grown beyond side-kick status to have a storyline of his own and I certainly hope it continues.

The action and danger are every bit as thrilling as the other titles in the series. And I continue to enjoy the way Harris mixes actual political intrigues with other motives to provide plenty of red herrings and possible threads to follow. It would be nice, however, if just once Devlin could engage in a fight with a bad guy and NOT have to see Paul for stitches. It's hard to believe that the man has any place on his upper body that does not have an ugly scar--and, given how often he's been involved in murder investigations over the past ten months to a year, it seems impossible that he's had time to heal properly. But that's a small quibble...and I highly recommend the series to those who enjoy a historical mystery. ★★★★

First line: Paul Gibson lurched down the dark, narrow lane, his face raw from the cold, his fingers numb.

Last line: And still they stood, her hand creeping out to take his, their gazes meeting as the wind snatched at her hair and her lips curve into a trembling smile.

Deaths = 11 (four stabbed; three natural; two beaten/hit on head; one blown up; one fell from height)