The Documents in the Case 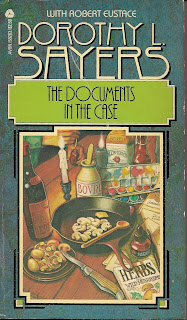 The Documents in the Case (1930) by Dorothy L. Sayers & Robert Eutstace

This mystery novel is a departure from the usual Sayers fare. There is no Lord Peter Wimsey or Bunter to be found and the story is told almost entirely through letters and written statements from witnesses. When Paul Harrison, whos has been working on bridges in Africa, receives word of his father's death, he returns to England to find that the coroner's inquest has returned a verdict of Accidental Death. It has been determined that George Harrison accidentally killed himself with poisonous toadstools. Paul isn't having any of it. His father was an expert on edible plants and would never have picked, let alone eaten the Fly Agaric (Amanita muscaria) in mistake for the Warty Cap (Amanita rubescens). He is convinced that either his father had realized that his wife no longer loved him and wanted to marry another and committed suicide or that his step-mother and/or her lover decided to remove the obstacle to their happiness.

The difficulty is proving it. Harrison was alone all day at "The Shack"--the cabin where he stayed when on one of his wildlife rambles. He had invited Lathom--his supposed friend and his wife's lover--to spend the holiday with him, but Lathom had gone up to town early in the morning. A local villager had seen Harrison alive and well...and hunting mushrooms well after. And Lathom appears to have an alibi. Not that alibi are all that useful in cases of poisoning--one doesn't necessarily have to be on the spot when the victim swallows the deadly brew. 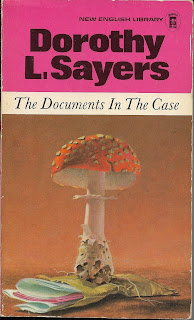 Paul gathers letters written by the deceased, by Lathom's roommate John Munting, and (most stealthily) by his step-mother to Lathom, as well as depositions from various witnesses and tries to piece together what happened in the months leading up to his father's death. He convinces Munting to help him and it is Munting who helps him discover just exactly occurred on the day George Harrison died. A little bit of scientific magic gives him the evidence needed to prove how his father could be poisoned by muscarine without having made a mistake in his mushrooms.

This is an interesting alternative novel in the Sayers oeuvre. The use of the various documents allows the reader to view each character and incident from numerous points of view. It underlines how not just beauty, but also truth is in the eye of the beholder. Picking out the bits of essential truth from the personal animosities and prejudices of each character's version of the events is the task of  Paul Harrison and the reader if we are going to get to the truth of George Harrison's tragic death.

The story is also an examination of marriage--of what can go wrong, especially when two people are so very mismatched. There is very little understanding between Paul Harrison and his second wife. He expects her to be the little angel of the house that his first wife was and she wants him to be more demonstrative of his affection and to share interests with her rather than giving "little lectures" on his pet subjects--painting and bizarre edibles. Neither are willing to give an inch to reach an understanding. He goes his way--thinking she'll be happy at home. And she finds someone who she believes appreciates her more. Such misalliances don't always lead to murder, but they do lead to a great deal of unhappiness. Sayers allows murder to solve the unhappiness problem, while we (the reader and Paul) have to worry at the problem of how to solve the murder. 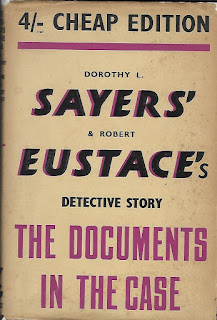 I found this to be highly enjoyable...to a point. The letters were very interesting, giving insight into all the characters and handing us clues when we weren't necessarily paying attention. I also enjoyed the small portion of the actual investigation that Paul Harrison and John Munting do. Where it falls down on the job is just at the point where the story ought to be picking up speed--when we head into the home stretch of figuring it all out. Sayers, for reasons that are inexplicable to me decides to dump a whole chapter on the "meaning of life, chemistry, the universe and everything" (apologies to Douglas Adams) which is meant (I think) to clear the path to the solution but is just plain deadly dull. I mean, yes, I see how it gets Munting to where he needs to be in order to ask certain questions of a certain specialist--but ye gads. Surely we could have gotten there by a less philosophically dense route. As it is we come into the finish feeling rather flat. ★★★ (a better ending would have boosted the rating.)

First line: Dear Sir, I am obliged by your letter of yesterday's date, and hasten to send to you, as requested, the complete dossier of documents.

Last line: The execution took place in Exeter Gaol, at 8 a.m. to-day, of [redacted], who was convicted in October of the murder of George Harrison at "The Shack," Manaton, by poisoning him with muscarine.

Deaths = 2 (one poisoned; one hanged)