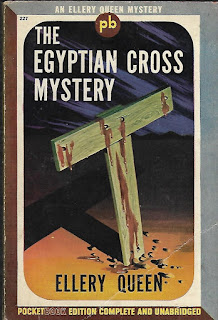 The beginning of one of Ellery Queen's weirdest and most brutal cases takes place on Christmas Eve in the small town of Arroyo, West Virginia. an eccentric schoolmaster by the name of Andrew Van is found crucified on a T-shaped sign post at the crossroads near his house. His head has been cut off--turning the body into a T and a T has been marked in blood on the door of his small house. Ellery is fascinated by the details of the case and initially thinks there is an esoteric connection to the tau or Egyptian cross (as he believes it to be). But when a second murder takes place, this time of a wealthy man near New York, and the body is found crucified on an American Indian totem post, it looks like the T imagery must stand for something else. Ellery's former professor (who lives near the home of the second murder victim, invites him to come and stay and show him how this detective business works. But after examining the available evidence everyone, including Ellery, is completely baffled.

After the second murder, it becomes apparent that the recent murders have roots in a Central European past. The men in the case--both victims and a third missing man--all have ties to Central Europe. But what do they all have in common. When a third man is targeted, the case is just as baffling as before and it isn't until a fourth murder occurs that Ellery finds the clues that will allow him to discover the true identity of the killer. But he, Professor Yardley, and the police will have to track the villain half-way across the country by means of planes, trains, and automobiles before they can bring him to justice.

It's kind of mind-boggling to watch Professor Yardley (in the lead), followed by Ellery, followed by the New York DA & Inspector Vaughn of the police be able to hop on trains and chartered planes one right after the other in their mad-dash across country in pursuit of the villain. It's difficult to imagine just one of them doing it, let alone three separate groups. Imagine trying that trick today...Of course, in today's world, there's also the advantage of technology to get messages where they need to go and for travel tracking purposes. So, perhaps it all evens out.

This is a pretty gory book considering that it was written in the 1930s. Four headless bodies, crucified. Blood dripping all over the place--especially in the last two murders. Not exactly what one expects from the Golden Age of Crime. And the esoteric bits--with Egyptian sun gods and nudist colony of sun worshippers of a different sort--serve a real purpose in addition to providing a distraction from other important bits. It's weird--but Queen had a method behind the madness.

I'll just fess up right now and tell you that when Queen gave his Challenge to the Reader--you have all the clues now. Do you know who did it?--I did not. The solution didn't occur to me at all. I had a sortof close idea--but with the wrong person in mind. An enjoyable read even though the murders were a bit more brutal than one might like in a classic crime novel. ★★★★

First line: It began in West Virginia at the junction of two roads half a mile out of the little village of Arroyo.

Last line: "I'll write a book about it, call it as a memento of my sometimes impulsive erudition The Egyptian Cross Mystery, and let the public pay for it!"

Deaths = four (all bashed on head and then beheaded)

In a recent conversation about deaths recorded in reading challenges, I made a comment about "quantity" deaths vs. "quality" deaths. I call quantity deaths those present-day authors who have a body count of 20+ per book - just load up and mow 'em down. When I considered "quality" deaths, this is the book I was thinking about. Beheaded and crucified? Now that indeed is a *quality* death!