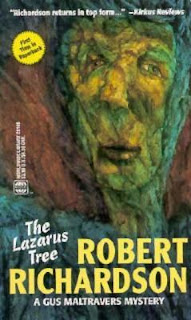 So welcome to Medmelton, where women have strange eyes, people protect murderers from the police, and witchcraft is still practised. It must make London seem quite safe. (Sally Baker; p. 73) The Lazarus Tree (1992) by Robert Richardson

Gus Maltravers has been invited to visit his friend Stephen before, but had never been able to make the journey to the Devon countryside. But Stephen's latest request seemed more pressing...there was a sense of urgency that Gus couldn't ignore. In the past summer, a mutual acquaintance--famous poet Patrick Gabriel--had been found murdered beneath the village's fabled Lazarus Tree. When he reaches the village of Medmelton, he learns that Stephen is worried about his stepdaughter Michelle. She has been acting strangely ever since Gabriel's death and recently odd items have been discovered under the Lazarus Tree. Stephen is afraid that Michelle is responsible, but he doesn't know why and doesn't want to admit that it might be connected to the unsolved murder. He wants Gus to look into the matter and discover what he's too afraid to look for.

Medmelton folk don't like meddlers. They didn't talk to the police and they're all determined not to talk to this outsider. Well, all but Sally Baker and Alex Kerr. Sally is from the village, but her marriage took her away and into the outer world. Her late husband's friend Alex has retired there from outside. As Gus begins to investigate and uncover the hidden underbelly of the town, Sally and Alex are able to give him a limited insider's view. It soon becomes apparent that there is a secret that someone is very desperate to keep hidden--and it's worth murdering for. Gus will have to separate the legends from the real story, the malicious playacting at witchcraft from the murderous activities. The women of Medmelton are said to have powers (based on their tendency to have eyes with two different colors), but are those powers used for good or evil?

This isn't exactly a pleasant little mystery. Medmelton is a pretty postcard village on the outside, but there are some pretty troubling things going on under the surface. And there aren't very many characters that the reader will feel comfortable with. Gus, his wife Tess (who arrives mid-book), Sally, and Alex are pretty much it. [In fact, I think I would really have liked to have read a mystery featuring Sally and Alex. They would have made a good team.] Stephen is too overwrought. His wife Veronica is too mysterious and cold. And the rest of the village is too repressed and insular. Gus makes a fairly decent amateur detective, but I never really felt like we got to know him well.

The best part of the book was when Gus, in an effort to stir things up, makes a few statements to the local grocery owner (who also is the hub of gossip in the village) which she immediately broadcasts along her grapevines. The village speculation on who and what Gus is--everything from Scotland Yard to MI5 or MI6 (they never could remember which was which) to Interpol (though what they'd want with an English village murder was anyone's guess)--is a real hoot. And if the entire book had been written with the same energy and depth, it would have been much more exciting. As it is--a decent mystery plot that comes just short of three stars. ★★ and 3/4.

Last lines: I hope it didn't hurt too much. Much love to you both, Sally Baker.

Deaths = 2 (one stabbed; one overdose)

That is a very interesting and spooky tree. Do the men come back alive after dying there? Looks to have been pretty atmospheric, too bad only 2+3/4 stars at the end.
~Lex (lexlingua.co)

Lex: There is a legend that if your love dies under the tree you can bring him back by doing certain rituals that involve certain objects.