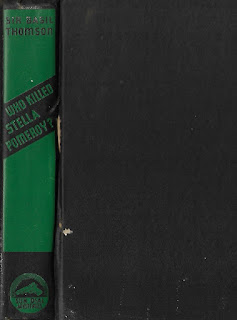 Detective fiction is my line, and there I can claim to be a judge. I can tell you that no one is more surprised than my uncle to find that I'm sticking to it. What he doesn't know is that when I read the manuscript of a thriller a sort of halo of light glows about the guilty man at his first entry in chapter three--it's a natural intuition. (Jim Milsom)

Who Killed Stella Pomeroy? (aka Death in the Bathroom; 1936) by Sir Basil Thomson

Miles Pomeroy was calmly working away in his garden when a house agent brought some clients to look over his bungalow with a view to a possible rental. He was perfectly willing to show them round, excusing himself briefly to warn his wife who he thought had been having a bath. A simple real estate visit turns into a murder investigation when Pomeroy finds his wife in the bathtub, killed by a blow to the head. The doors and windows were all locked, so it seems unlikely that a stranger got in and Inspector Aitken is certain that the man they want is the one who was working in the garden.

Jim Milsom, one of the people who had come to look over the bungalow and dabbler in detection, doesn't believe Pomeroy is guilty and he thinks Aitken a very uninspired detective. He scouts about for clues and jostles the long arm of the law into calling in his friend Inspector Richardson of the Yard. Not only is Richardson a much better detective than Aitken, he's bound to let Milsom aid and abet the cause of justice. Once the Scotland Yard man has heard Milsom version of the discovery of the body and heard about the clues the local inspector missed, he's ready to have a more open mind about the suspects. Milsom isn't the only one ready to help Richardson find the right culprit (not Pomeroy!). Pomeroy's cousin Ann is also determined to see him cleared and Pat Coxon, a young sleuthhound who lives in lodgings not far from the crime scene, is also eager to help the police search for clues.

The more these detectives dig into the life of Stella Pomeroy, the more suspects there are. There's the mysterious man, Edward Maddox, from New Zealand who arrives on the morning of her murder with news of her uncle's death and her legacy. There's the man Edward befriended on the ship from New Zealand who seems unnaturally interested in the legacy. There's the journalist who rumor says was having an affair with murdered woman. And there's the owner of very fancy handbag which was found in Stella Pomeroy's closet--a handbag that various people seemed determined to get their hands on. Before the case is closed, there will be infidelities, blackmail, fraud, and a second attempted murder to add to the original crimes...and Richardson will need all his helpers to get to the bottom of it all.

This detective novel was unexpectedly delightful. Thomson was head of the Metropolitan Police during WWI, so the investigation has an authentic ring to it but the writing is neither dull nor overburdened with procedure. In fact--if I hadn't had the prospect of work looming before me the next morning, I might have stayed up until the wee hours to finish it. He also describes Richardson giving various suspects and solutions consideration without a repetitive rehashing of the the entire body of evidence to date. It seems to me a very realistic portrayal of the methods and processes of a detective superintendent.

One very tiny frustration was a purely personal one--readers of the blog will know that I posted about my quest to find a mystery quote fitted to each minute of the day. It is incredible how often Thomson mentions clocks and makes vague references to time and doesn't give the actual time of day. When he does break down and tell me what time something happened it is almost always a nice tidy even hour, half-hour, or quarter-hour. Surely to goodness, the man had to put actual times in his real police reports and you'd think with the accuracy in police methods he has all over the place in this story that habit would have caused him to use better time references. But maybe he thought fiction readers weren't all that bothered about down-to-the-minute times, especially since split-second timing isn't crucial to his plot.

Overall, a fine Golden Age detective novel and I will definitely keep my eye out for more of the Richardson mysteries. ★★★★

First line: A big sunbeam touring car was crawling along the concrete road of one of the new building estates bordering on Ealing.

Last lines: No, she would never give up everything to become the wife of an officer in the C.I.D. But Ann did.

I've always assumed that the Richardson books were dry-as-toast police procedurals and always avoided giving them a try whenever I had the chance. I'm not sure, but I think this is the first review I've ever read of one of them. Thanks, Bev, for telling me I was wrong!

Steve: This one at least isn't dry. Hoping to find more so I can have a better sampling.

This is one of a series of eight Inspector Richardson novels which have all been republished at Dean Street Press if you are looking for more. Sir Basil Thomson's life history is worth dipping into - Operation Mincemeat in WWII was based on 'The Milliner's Hat Mystery' and he interviewed the Mata Hari. He was publicly disgraced and forced to leave CID when he was seen meeting with a known prostitute named Thelma de Lava (he claimed he was researching a book).

Thanks for the heads up! I may have to go the reprint route (and will if push comes to shove)--but I much prefer finding vintage copies.