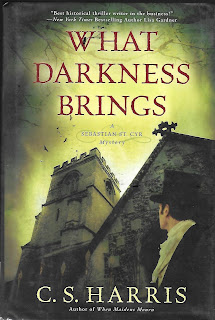 It's September 1812...a mere ten months or since Sebastian St. Cyr was himself accused of murder and had to begin his unofficial career as a detective to clear his own name. Ten months and he's already involved in his eighth round of murders. This time an unsavory gem dealer Benjamin Eisler, who also dealt with a spot of usury and blackmail on the side as well as dabbling in the black arts, has been killed and the husband of Sebastian's former lover, Kat, has been accused of the murder. Russell Yates, shipping captain with rumors of piracy in his wake, was found standing over the body just moments after the shot was heard. Both Kat and Yates swear he's innocent and Sebastian will do anything for the sake of his former love--even at the risk of his newly forming relationship with his own wife Hero.

The local magistrate is so sure that Yates did the deed that he didn't even bother to question potential witnesses closely. Sebastian's investigation reveals that Eisler had recently been handling a rare blue diamond--rumored to be the missing centerpiece to the French crown jewels. But the diamond has gone missing and Sebastian isn't the only one interested in its connection to the gem dealer's death. The strands of the case reach all the way from the Prince Regent to Napoleon of France and every time Sebastian finds a valuable witness they wind up dead before he can get their full story. It doesn't help that he begins to doubt that Kat is being completely honest with him. In the past, if she couldn't tell him something for reasons of her own, she'd tell him so. Now, he doesn't trust what she does tell him. There's one witness left who may be able to give him the last pieces of the puzzle--but can he find her in time?

This is another exciting entry into the historical series which returns to underlying political currents. Everyone from the Prince Regent of England to Napoleon is concerned about the diamond, but Harris does a fine job of weaving personal motives into the plot to keep the reader guessing on just who killed Eisler and why. I kept waiting for Sebastian to realize that there was a missing witness--and had just about given up hope when he finally realized the significance of certain aspects of the dead man's home. But even though I was a step ahead of our detective on that point, I still didn't spot the real killer. A nicely done turn-about on the motives kept me in the dark to the end.

I appreciate the amount of historical research Harris puts into these books. This adventure uses real people and real incidents regarding the history of the Hope diamond. For a period of time, it is uncertain what became of the jewel and she uses one of several theories as the basis of her plot. A very enjoyable rendering of historic events. ★★★★

First line: The man was so old his face sagged in crinkly, sallow folds and Jenny could see pink scalp through the thin white hair plastered by sweat to his head.

Deaths = 12 (one poisoned; five shot; two stabbed; one hit on head; two drowned; one fell from height) I can always count on C. S. Harris to up the body count for me....

Well, if it is body count you're looking for, I guess you found your author!

Davida: I am...but only because I'm doing a mystery reading challenge called the Medical Examiner's Challenge where we record deaths of named characters (and how they died). :-)

I finally got book 1 in this series - my friend was the editor and I have been meaning to read it for years!