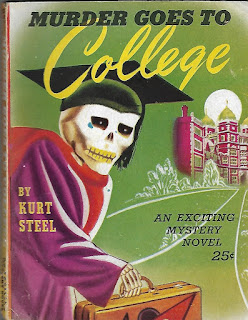 Chelsea College has a lot more going on than just classes on Chaucer and Calculus and Philosophy and Psychology. One of the professors is helping out a crime boss with a numbers game and another is cooking the books and skimming a little off the top for himself. When Tom Kelly is shot in his office, private detective Hank Hyer is brought onto the job by one of the trustees, his friend Albert Jocelyn. Hank's mission is to find out if the numbers racket decided Tom's number was up or if the professor's death is connected to the fraud that has been going on in the college treasury. Jocelyn had thought for some time that something wasn't quite right with college's finances and had asked Tom to take a quiet peek at the records. Did he discover anything? And did someone kill him before he could reveal the truth?

Or did Tom's involvement with Strike Fusil, head of the numbers racket, sign his death warrant? When Fusil's gun turns up as the murder weapon, Hank believes that some clever scholar has been manufacturing evidence to frame Fusil--but can he prove it? If he can, he'll earn a twelve thousand dollar fee from the crime boss. But it's not going to be easy...the police have their sights on Fusil and a keen eye on Hank as well. They wouldn't want Hank to get clever and produce a fall guy to take the rap just so he can earn a hefty reward. They don't know Hank very well...he'll give them the right culprit even if it means losing twelve thousand smackers.

I have to say that Kurt Steel wasn't a name that I knew before I came across this title on a list of mysteries with an academic bent. I'd say that's for a good reason. His detective Hank Hyer isn't very memorable. I give him kudos for being honest and not being willing to produce a faked confession just to earn a good chunk of change. But he's just not an engaging protagonist. His "witty repartee" with the college professors falls flat and he doesn't do much better with those who are more on his level.

Steel does have a way with descriptions. He evokes the atmosphere of the college at night with short, but well-defined phrases. He gives thumb nail sketches of each character that are just long enough to give a real sense of who each person is without being too wordy. But where he falls down on the job is his dialogue. It has a very jerky rhythm and some of the exchanges don't even seem to make sense. I had to go back and reread a few portions because I thought I must have missed something. I hadn't--the back and forth between two characters just really didn't track properly.

My regular readers will know that I can't pass up an academic mystery. And that cover just about makes the whole thing worthwhile--but I can't really say that I recommend this one. The characters are well-drawn, but they're not really compelling. The villain of the piece was pretty obvious to me (but that may be my own preconceived notions at play) and the red herrings weren't distracting enough (at least to me). The best things about the book are the cover, the descriptions of place and people, and surprisingly enough there is an effort made at fair play. Hank displays every clue he finds and it's possible to discover the identity of the culprit using those clues. ★★ and 1/2

First line: Henry Hyer shifted his arm on the seat behind Marya Jocelyn's shoulders and peered out.

Last line: Singleton said, "Isn't that too bad, Hyer?" and urged Fusil out into the corridor. [Don't let that last line fool you, it may not be the spoiler you think it is.]