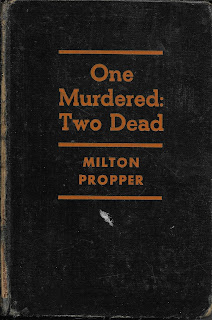 Mystery as easy as one, two, three: one murdered, two dead (three if you count the unnamed, unborn baby), and three obvious suspects. Wealthy, willful socialite Madeline (Kent) Emery, heiress of a steel king and married to a cold, unfaithful husband (suspect #1), is found murdered in her bed after a thief (suspect #2) is caught red-handed exiting her fabulous estate early one morning. At first, it looks like an open and shut case of a burglar who panicked after she discovered him rifling through her jewelry--but detective Tommy Rankin soon finds things that just don't fit with such a simple solution. For one, what did the burglar do with the knife she was stabbed with? It's not on his person and it's nowhere to be found in the house or on the grounds. For another, why was the dead woman wearing her robe in bed? As he begins digging into Madeline's life, he spots suspect #3, Madeline's cousin Ed Hastings who will only reap major benefits under the steel king's odd will if Madeline dies without children from any of her marriages. And even those additional suspects don't quite satisfy Rankin especially when an event from the past keeps cropping up in the present. What could a young woman's five-day disappearance from school have to do with her death now? That's what Rankin intends to find out. But will it ultimately answer the question of who murdered her? 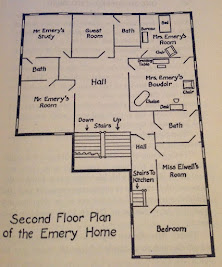 Propper's book is fairly typical for a 1930s, Golden Age mystery. There is a fairly small set of suspects. Motives are spread around liberally with red herrings and multiple dead end trails. Each time Rankin (and we) think he has finally found the motive and the culprit, a new wrinkle appears that needs following up. He displays his clues fairly and observant readers could spot the killer if they correctly interpret them all. He also includes a handy map of the Emery premises to help readers understand who was where at the time of the murder.

Rankin is an interesting detective who is no super sleuth. He uses commonsense and hard work (see quote below) rather than esoteric knowledge or mysterious insight to track down his villains. He may make a few mistakes along the way, but he's willing to admit them and will keep going until he finds the truth--even if he has to go back to the beginning and start all over again.

I enjoyed my introduction to Tommy Rankin and hope that I will be able to track more down in the future. I'm glad that the 1936 Club led me to feature this lost treasure from the Golden Age. ★★★ and 1/2.

First lines: "Number three-two-five-nine." At three o'clock on the morning of November 20th, exactly on schedule, Patrolman Lester Beahan "pulled" the box at the corner of Taylor Street and Clyde Road.

[about Tommy Rankin, our protagonist] Yet he laid no claim to brilliance or the phenomenal astuteness of the fictional detective. He worked essentially by commonsense methods, without the manner of a mind-reader producing answers from thin air. His power to reason logically from his premises and reach telling conclusions was coupled with a capacity for hard work, perseverance, and determination.

Last line: To all appearances, this is another addition to your list of successes, of which you can justly be proud.

Deaths = 2 (one stabbed; one natural)

Don't you just hate it (from a Medical Examiner perspective) when you have un-named deaths! Didn't he know that ~80 years later people would be working reading challenges and looking for that sort of thing? Anyway, I enjoyed the one Propper I have read (The Boudoir Murder) which is another Tommy Rankin. In my review I wrote: "I was a bit disappointed that Rankin is such a sterile character - we learn nothing about him. Is he married? single? where does he live? Does ever eat? drink? smoke? All unknown, perhaps revealed in another book. He is a machine, on the job 24/7."

Oh, take a look at this article "Mystery Monday: Who was Milton Propper?" by Linda Shenton Matchett (who lives near me BTW).

I haven't heard of this author, but that is SUCH a good title. And I do like a floorplan in a murder mystery novel, because I definitely can't cope if they just describe it and expect me to remember how all the rooms relate.

Rick: I sent you a couple of email follow ups on these comments.

Simon: Milton Propper isn't well-known (even among those of us who fancy ourselves Golden Age Detection fans) and his stuff is a bit difficult and/or pricey to find. But I do agree about floorplans--I love it when they are included.