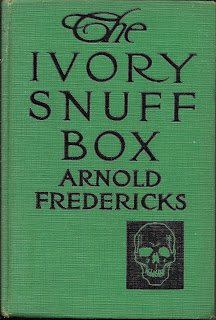 Monsieur Lefevre calls upon his young friend Richard Duvall to help him in a matter of extreme importance. Never mind that Duvall just that day got married and is planning to embark on his honeymoon. The honor of France is at stake! Duvall isn't happy about leaving his new bride Grace so soon, but he does owe Lefevre his loyalty. BUT when he learns the object of his mission he thinks the Prefect of Police has lost his marbles. It appears that the ivory snuff box of the French ambassador in London has gone missing. Quelle horreur! He's about ready to grab his bags, join his wife, and leave when he realizes that there must be more to this than meets the eye. Surely Lefevre wouldn't request his help in a matter of pure theft.

So, trusting his friend and mentor, he leaves Grace behind, joins up with Monsieur Dufrenne, an elderly expert in ivory antiques who can identify the heirloom, and heads to London to get the details from Ambassador de Grissac. The box was stolen while the ambassador was in his dressing room--alone save for his valet. It seems obvious that the gentleman's gentleman must have taken it but the box was nowhere to be found: not on his person and not among his things. Since the theft happened the valet has been kept locked in his room, and Duvall insists on interviewing him. When the room is unlocked, the man is found dead, with writing implements about him, but no sign of any written documents. It's soon discovered that Noel (the valet) wrote a note to a friend by the name of Oscar Seltz, cancelling an engagement for the evening. Duvall's instincts tell him that Seltz is the key to the whereabouts of the missing box. He and Dufrenne set out on Seltz's trail--a trail that will lead them to a nerve specialist in Belgium.

Meanwhile, Grace is not left pining in France for her new husband. Oh, no. Monsieur Lefevre calls on her to explain why she and Duvall cannot set sail on the honeymoon just yet and she demands to help in some way. So, she is sent to Dr. Hartmann's ostensibly to be cured of sleepwalking (a condition more easily faked than most nervous disorders). She is to keep a watching brief and if Duvall fails in his mission to recover the snuff box before it reaches the doctor, then her job will be to steal it back.

This is very much a thriller with a romantic touch thrown in and very little mystery. We know immediately who the bad guys are. The only question is how many hair-raising adventures will our heroes and heroine have before the grand finale? There is the obligatory evil genius scene at the end where it looks for all the world like Dr. Hartmann has won and Duvall is sent back to France in disgrace. The only real mystery is how did Duvall manage to get the upper hand after all. But for all the standard thriller qualities, this was a fun read. I do wish Grace could have continued to be the strong heroine throughout the entire novel. She starts strong, does well in her "sleepwalking" role and observation duties, and then falls apart when Hartmann gets his hands on Duvall. I can see how that was made necessary for the plot to work as it did, but would have liked to see a better solution that allowed Grace remain heroic to the end. I am also curious as to how old our elderly expert is. If he really is the frail, old man that he's depicted in certain scenes, I can't see him managing as well as he does in others when he needs must play the hero. But overall, a grand adventure and worth the day's reading. ★★★

First line: The last thing that sounded in Richard Duvall's ears as he left the office of Monsieur Lefevre, Prefect of Police of Paris, were the latter's words, spoken in a voice of mingled confidence and alarm, "The fortunes of a nation may depend on your faithfulness."

Last line: "Dear old Lefevre," said Duvall, as he drew Grace to him and kissed her.