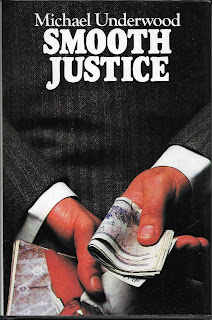 Magistrate Donald Ferney presents himself to the public as "the kindly magistrate"--wanting to be known for his smooth, but fair justice. But he's far from kindly on a personal level and nearly everyone who knows him loathes him. He belittles the staff in his courtroom, publicly humiliates some of them and actively impedes the career of others. He's not better at home where he finds fault with everything his wife does. It's hardly surprising that a man of his nature receives threatening letters--most judges do from those who have received a sentencing they disagreed with. But when a new batch arrives just as a very important case begins--that of a policeman accused of being corrupt--they have a different feel to them.

He shows the anonymous threats to Detective Superintendent Eversham, lead investigator in the case against Detective Sergeant Wilkley, and Eversham begins looking for connections to the hearing. But he doesn't lose sight of the fact that a great many people who are a lot closer to Ferney might have a reason to want him out of the way. When one of the suspects, Reg Atkins--usher to the court for 30 years--is killed, things come more serious. It is immediately thought, since Reg was killed just outside the magistrate's entrance to the court, that Ferney was the intended victim. Everything points to a classic whodunnit, but not everything may be what it seems and there are those whose motives aren't as clear as it first appears.

Underwood/Evelyn was called to the bar in 1939 and his background in law definitely shows in the details of his novels. The reader has a very clear understanding of the workings of the magistrate's court without the burden of too much legalese. It is something of a triumph for the author that there are very few likeable characters in the cast and yet this was a very interesting, one-sitting read for me. It didn't even matter that I was quite sure of who fairly early on--but the difficulty was in the "why" and it was a good ride getting to that destination.

I did like Superintendent Eversham and I was particularly pleased that he was able to solve the mystery before his murder squad counterpart. Eversham is only involved in the investigation because of its possible ties to his case against Wilkley. Detective Inspector Cruttenden is convinced that Eversham has been shuttled into internal investigations because he doesn't have what it takes to handle a case of murder. I was glad that Eversham was able to prove him wrong.

A nice non-series mystery which should interest those who like their crime with a bit of courtroom drama. ★★★ and 1/2.

Last line: He pleaded guilty at his trial which, as Eversham remarked at the time, was probably the only decent thing he had done in his life.

Deaths= one hit on head