Gently in the Sun 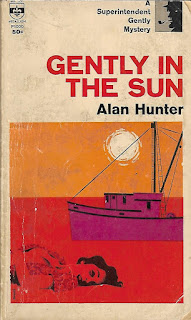 Rachel Campion was a beautiful young woman who likes men and whom men like a lot. She was faithful (after her fashion) to her boyfriend/boss--but he had to understand that she just couldn't help liking other men. And liked being with them. She was secretary and lover to Alfred Mixer and, though he doesn't want to admit, he was very jealous of Rachel. Anyone at the Bel-Air guest house could tell you that. And when Rachel is found strangled to death on the beach Mixer is at the top of the Devon County Constabulary's suspect list. But Mixer has an alibi of sorts and there is little real evidence, so they decide to call in the Yard.

Inspector George Gently is sent to investigate and at first it looks like the local police have tagged it right. But his seeming (to local Inspector Dyson) random questions and even more eccentric methods unearth other motives. There's the painter who lied about how well he knew Rachel--well enough, in fact, to paint a very provocative portrait of her. Then there's the two fishermen, Dawes and Hawks, who have an odd relationship to the dead woman...and to each other. And then, just as Gently thinks things are becoming clear, he discovers another corpse buried in the sand on the beach. This one is about twenty years old and it looks like Rachel's death may not be as simple as he thought.

At some point in my pre-blogging life, I read an Alan Hunter Inspector Gently novel (either Landed Gently or Death on the Heath--I'm not certain which came first) and pronounced it so good that I put him on my "To Be Found" list and over the years I've accumulated a fair number of them. I pull one off the TBR shelf every once in a while and discover that I can't figure out why I thought I needed these so much. It's not that they're bad. Most are fairly decent little mysteries and very quick reads. But they're just not all that and there are certainly other authors that I could have spent more time looking for with more exceptional results. I may have to go back and reread those books mentioned above to see if I can figure out what grabbed me initially.

This particular title is a perfectly fine outing at the beach with Gently and there are some humorous bits where he "goes tourist" and buys some outlandish shirts to wear in the summer heat. But it does leave a something to be desired in the way of actual clues--for a police procedural, there's not a whole lot of evidence-gathering and just barely enough suspect-questioning. At one point, Gently sits down beside one of the suspects. They're on a bench facing the beach. And they just sit there. Neither one says anything. they don't even really look at each other--just at the beach. And, suddenly, it all clarifies for Gently. He just knows how it all happened and who did it and everything. Does he tell us? Of course not, we've got a couple more chapters to go and one more bit that will muddy the waters and make Gently question, just briefly, whether he actually has it right. But as of that moment on the bench...he knows. If I had been given more clues to work with then maybe I would have too. ★★★

First line: Even at this hour in the morning, when the dew still clung heavily to the rough, wiry blades of the marram, one could tell that by early afternoon the temperature would be nearing ninety.

Last line: He had lately, he said, married off his youngest daughter; now, excepting for his housekeeper, he was living there alone.