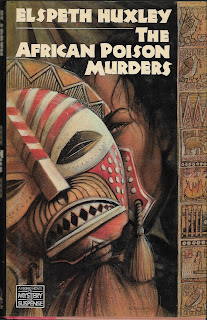 The African Poison Murders (originally published as Death of an Aryan; 1939) by Elspeth Huxley

Superintendent Vachell, a Canadian national working for the police force in East Africa, is persuaded by Janice West to investigate a series of horrific pranks that have been taking place in a farming community filled with British and German settlers. Crops have been trampled; pigeons have been killed (decapitated); and the Wests' prize setter is mutilated and dies. Tensions are high between the British community and a certain farmer by the name of Munson who has ties to the German Bund. Not only is there suspicion about his ties to the rising Nazi party, but the man is a thoroughly mean and nasty neighbor. It isn't surprising that one morning he's found dead, but Vachell is in for a difficult time to prove it was murder--one of those untraceable African poisons is the suspected method and everyone seems to have an alibi. Motive is something different--pretty much everyone seems to have one of those--from the Wests and the disputes with Munson over his cattle's trampling ways to Jolyot Antsey who also had fence line disputes to Herr Wendtland who had come to take over Munson's place with the Bund. There are also rumors of an affair between Janice West and Munson--but it seems hard to credit when you look at the characters involved. And, of course, there's Munson's nephew Edward Corcoran who inherits the farm when Munson dies.

But then Dennis West, a well-liked member of the community, follows his neighbor in death during a massive, sudden fire. And Vachell must find a motive that will explain both murders...and enough evidence to bring the crime home to the murderer. There's not a shred of proof that will stand up in court. He fears that another murder is still on the agenda and can only hope that he can catch the killer in the act without losing another member of the settlement. 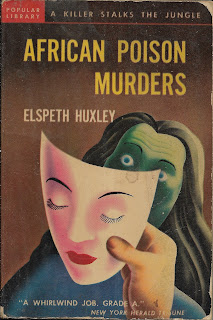 I found it difficult to immerse myself in this mystery. Previous Huxley books did an excellent job of making the reader feel like they were really on the spot in Africa--from colonial life surrounding the Government House in Huxley's first book to the safari setting of her second. But this time, I really didn't get a good sense of the farming settlement. It was also difficult to see my way through the very tenuous motives to anything solid in the way of clues. When Vachell explains the clues and his thought processes at the end of the story, it all seems very reasonable, but I can't say that I said "Oh, yeah. So, that's what that meant." I didn't pick up on any of it at all. And I'm not completely sold on the solution--it seemed to be a lazy way to wrap it all up--especially after the build-up of certain other motives. I like the character of Vachell very much and I understood his difficulties in the keeping the investigation impersonal (no explanations...it might provide a spoiler...). He provides the most interesting portions of the story and his interactions with his second in command provide a bit of humor (though Inspector Prettyman doesn't seem to get the jokes quite a bit of the time). ★★ and 1/2

First line: All the way up the rough, bumpy road Vachell wondered why the woman at his side had been so insistent.

Last lines: "You'll stay have some lunch?" "I'd be glad to," Vachell said.

Deaths = 4 (one stabbed; one poisoned;  one burned to death; one shot [includes one red setter dog by the name of Rhode])

Well, they can't all be great books.