Top Ten Tuesday
Two days late and two dollars short, but here I am trying to keep up with the Top Ten Tuesday meme. This week's prompt is animals from books--both real and imaginary. Most of my reading is in the mystery field, so a most, if not all of these will come from my crime fiction reading.
1. All of the animals mentioned in the Frances & Richard Lockridge series. There's Pete, Ruffy, Toughy, Teeny (short for Martini), Gin, Sherry, Stilts and Shadow--all Siamese cats who love to "help" Pam & Jerry North around the house and sometimes, though, less often with mysteries. There's Colonel and Midget--a Great Dane and tiny black cat in the Lieutenant Heimrich series. And Nathan Shapiro had his little Scottie dog. The Lockridges had a knack for writing about animals in a very human way without making them cutesy or too anthropomorphized. 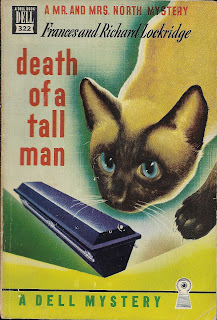 2. Carstairs, a Great Dane, who works with Norbert Davis's P.I., Doan. Carstairs is so big, he just might need his own zip code. He loathes alcohol and being shot at. He doesn't care for new faces, but will tolerate a pretty one if its owner treats him right. Oh...and he believes that he's the brains of the operation and that Doan works for him. He appears in three mysteries from the 1940s. 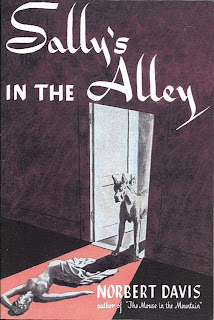 3. Basil (the mouse) of Baker Street in books by Eve Titus. The character upon which Disney's The Great Mouse Detective was based. I thoroughly enjoyed both the movie and the books in the series that I've had the chance to read. It's a great way to introduce young readers to a Holmesian character. 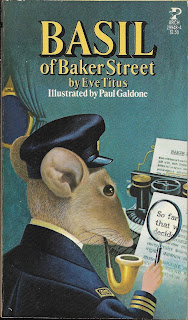 4. Seneca, young Lord Peter Wimsey's black kitten, who goes missing and is the means by which LPW meets the great detective, Sherlock Holmes. Seneca may not appear much in the story, but the kitten did serve as the source of meeting for two of my favorite detectives--so full points to Seneca. 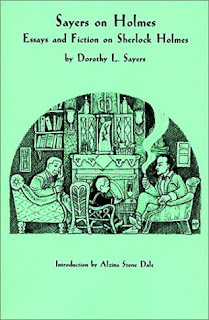 5. Schnucke and Driest, German Shepherds, who aid Captain Duncan Maclain in his work as a private investigator. Maclain is blind and needs the Shepherds--one as guide dog and and one as guard dog to protect him in sticky situations. 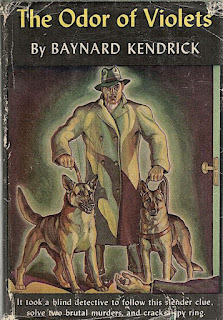 6. Toby with Sherlock Holmes in The Sign of the Four. Holmes uses him to track Jonathan Small and his companion to the the boat launch. When he sends Watson to collect the dog for the tracking job, Holmes says that he would "rather have Toby's help than that of the whole detective force in London." 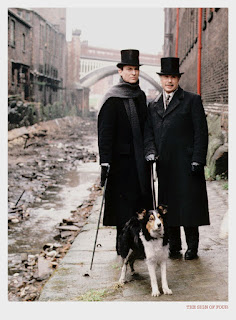 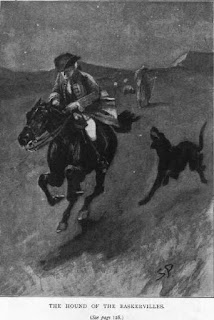 8. Bob, the terrier, from Agatha Christie's Dumb Witness [aka Poirot Loses a Client]. Poor Bob--blamed for leaving his ball on the stairs and causing his mistress to tumble down the stairs. She later dies from what the doctor describes as chronic liver trouble. But Bob's behavior on the night of the fall helps Poirot discover a murderer. 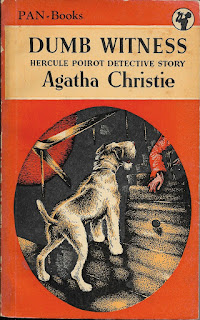 9. Asta, the dog belonging to Nick & Nora Charles in The Thin Man (and the the movies that followed). In the novel Asta was a female Schnauzer, but became a white male terrier in the movies. 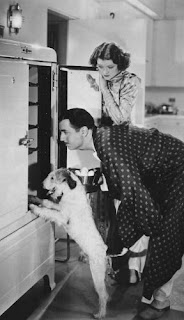 10. Cap'n--the titular bird in Anne Austin's The Avenging Parrot. Cap'n is the only eye witness to the cold-blooded murder of an elderly woman. and Dundee (our detective) is convinced that the bird's squawking has a clue to the murderer's identity. How Dundee uses the bird and a handful of other clues to solve the murder makes this lesser-known mystery an absorbing read. 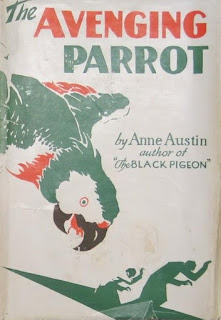 What a lovely list! I was just talking about the Hound of Baskerville the other day. That tale really made an impression on me.

Glad you were able to join in with the meme. You have lots of good choices. I have been wanting to read The Avenging Parrot, so I am glad to hear that it is a good one. Basil is also a very good choice. Never read the book but love the cartoon film. I have read the LPW short stories but completely forgotten about the cat you mention, so thank you for refreshing my memory on that one!

Kate, I hope you enjoy the Avenging Parrot when you get a chance to read it.