Death of a Busybody 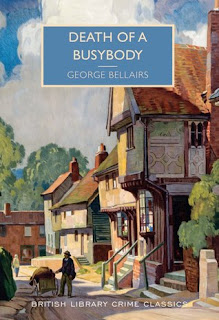 Death of a Busybody (1942) by George Bellairs

Murder at the vicarage--with a vengeance! Miss Ethel Tither is the busybody of Bellairs's title. Her life's mission is to dig up tittle-tattle--not with an eye to blackmail or poison pen letters as is so often the case in Golden Age village mysteries--oh no. Hers is a much loftier (in her mind) purpose--to show sinners the error of their ways and bring them back into the flock. It doesn't seem to occur to her that her mission is seldom successful. She more often than not drives the lost sheep even further from the fold. And makes herself several enemies while she's at it. When she is found hit over the head and drowned in the vicarage cesspool there is no lack of suspects, from Mr. Weekes whose weakness for a certain young lady was revealed to his wife to Walter Thornbush who wanted to marry her maid and was frustrated by Miss Tither's threat to cut off the girl's promised legacy if she married to Nancy Pearce and Reuben Beallot whose premarital goings-on were revealed to one and all to her own nephew whose inheritance was threatened when she found out he wasn't quite the industrious missionary he'd led her to believe.

The local police force have quite enough on their hands with a spate of robberies and a number of their officers off on a training course, so Scotland Yard is called on very quickly. Not wanting to the put the backs up of the villagers, they send Inspector Littlejohn who fits right in with the country folk. PC Harriwinkle is thrilled at the chance to work with the big guns from London and immediately begins dreaming of his sergeant's stripes. It winds up that the constable is a pretty observant man and produces some vital clues that help Littlejohn sort out the case. Those stripes are in the bag!

This is a lovely English village mystery. The characters are vibrant, humorous, and have the best names. From the Rev. Ethelred Claplady to Major Crabtree (whose real first name is Major) to Littljohn's assistant back in London, Cromwell, who. when contact with his superior is out of the question, figures out what to do next by asking himself, "What would Oliver Cromwell do?" Bellairs has a definite flair for description--both of the village & and surrounding area and the village residents and their habits. The details of the grapevine at work--spreading the tale of the discovery of the body that runs from the truth to "Miss Tither's been found shot in the vicarage orchard" to the final version "Owld Tither's been done in. They say the vicar's done it."--gives a pretty accurate view of how the gossip's game of telephone goes.

I did spot the villain of the piece as soon as a certain something was discovered--well before the final chapter was in sight--but did not make all the of connections that would be revealed in the wrap-up, so the denouement still held surprises for me. It's a tidy little mystery with fun and good characterizations that fans of the Golden Age should enjoy thoroughly. ★★★★

First line: The September morning which greeted the Rev. Ethelred Claplady, M.A. (Cantab.), incumbent of Hilary Magna (and Parva for that matter), made him want to leap and shout.

Last line: It contained practical evidence of that good man's activities--honey in the honeycomb.

Glad you enjoyed this one. This was my first experience of Bellair's work and it encouraged me to try more by him. But oh what a place for a body to be found lol

Yes, that is quite a place to find a body.

This is my fourth Littlejohn book. I really do enjoy these.