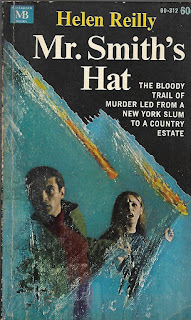 Pulp western writer and hard drinker Gilbert Shannon is found dead in a squalid little apartment in New York City. It looks like a pure case of accident due to a drunken slip, but one of Inspector McKee's men isn't satisfied. You see, there's this clump of dried mud that he found in the dead man's room and no way to explain how it got there. Shannon's shoes had no mud. There was no mud anywhere else. An analysis of the mud reveals it to be garden dirt with two cat hairs, bits of a bird feather, and a seed. McKee tells his man to plant the seed and see what grows out of it. What they get is a rare zebra zinnia and a murder case. Well...three murders once all is said and done.

While waiting for his seed to grow, Detective Frisch attends the funeral where he runs into the titular Mr. Smith and his hat. When he first notices Smith, the detective thinks the man is overcome with emotion. Then he realizes the man isn't crying...he's laughing. Soon McKee and Frisch are tying to figure out what Smith has to do with Shannon's murder. Then after the seed has produced the rare zinnia and a meticulous search has revealed that it must have come from Seers Lake in in Connecticut, McKee's attention is drawn to a group staying up at the lake. He heads out there just in time to discover that one of the group, the Baroness von Ridingsvard has been killed in, of all places, a private zoo monkey room. McKee is convinced that the murders are connected, but the district attorney is not so sure and throws his weight around a bit (trying to clear up the, to him, more important case in the country) and puts the killer even more on his guard. But McKee's bulldog tenacity keeps him on track and the details of police work will prove that the Scotsman is correct. He'll have to figure out the significance of a railway ticket, a missing photograph, an old writing desk, and the last entry in Shannon's diary before he'll have all the evidence needed to put the right suspect behind bars.

The story begins with the tail-end of another case--an interesting opening. "The lady who admitted having too heavy a hand with arsenic in her husband's jelly roll was led weeping from the room." The subtle black humor of the full scene makes me wish that Reilly had given us the complete story of The Case of the Arsenic Jelly Roll (with more mystification, of course). But the story she did provide was a pretty good one. Lots of atmosphere in the country setting. McKee being good an mysterious about his clues. A couple of chase scenes. And death in a monkey room. What more could you want?

Reilly was very good at giving the reader the finer details of police procedurals without boring us to death with all the routine. And Inspector McKee is an interesting detective. He seems to produce results out of nothing...but then he does give the facts that led him to the conclusions. Definitely a good start to my intended binge on 1936 mysteries for the next week or so. ★★★ and 1/2

First line: "That will be all, lieutenant, you can take her away."

He knew the Scotsman. Once McKee got his teeth into a thing he never let it go if it took him years to get what he was after. [p.20]

She had been brought up by a wealthy aunt, had the voiceless assurance lack of contact with reality brings and the manners of an empress. [p. 25]

...Farquesan was knocked off his pins.by the awful sight at their feet. Odd how men changed their character in a crisis, He was usually cool and decisive, with an opinion on everything, while Di Mora was lazily casual and reluctant to interfere in what wasn't strictly his own business. It was Di Mora who took charge. [p. 31]

Hogue was not at all surprised when  McKee turned up suddenly under the trees in the gloom at the foot of the hill, partly because his capacity for surprise had reached the saturation point and partly because he was afraid of the Scotsman and was constantly expecting him to appear, a bird of evil omen. [p. 103]

Fernandez glanced at the Scotsman suspiciously. Towards the end of any investigation that was particularly difficult McKee had a way of speaking in parables, of hugging his knowledge to his bosom and producing his effects somewhat after the manner of a conjurer. It infuriated officials close to him who didn't like rabbits out of hats on general principles and who had a passion for the dotting of i's and the crossing of t's as they went along. [p. 169]

Last line: Mr. John Edgerton Smith has had rather a mean deal.

I am thankful for the death toll count! I always look forward to that when I read your reviews. :-) And somehow the title about a mundane object (hat!) coupled with a great cover makes this 1936 mystery not so bad, eh? Thanks for bringing back some of the older books.
~ Lex (lexlingua.co)

Lex: That cover is both great and bizarre. It is far too modern-looking for 1936 and I couldn't really figure out what it had to do with the story. But it is very cool looking.

[It is kind of fun totaling up the body count...it's all Rick's fault over at he Medical Examiner's Challeng. :-) ]