The Devil & the Dark Water (spoilerish) 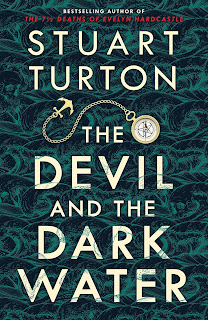 Synopsis with info from the book flap: Murder on the high seas. A detective duo. A demon that may or may not exist. It's 1634, and Samuel Pipps, the world's greatest detective, is being transported from Batavia [modern day Jakarta, Indonesia] to Amsterdam to be executed for a crime he may or may not have committed [he hasn't even been told what the charge is]. Traveling with him is his loyal bodyguard, Arent Hayes, who's determined to prove his friend innocent. Among the other passengers is Sara Wessel, a noblewoman with a gift for healing and a secret.

But no sooner is their ship out to see then deviltry begins to blight the voyage. A strange symbol linked to Old Tom, a demon that had previously ravaged Europe, appears on the sail. A dead leper stalks the decks. A ghost ship stalks them. Livestock is killed in the night. And then the passengers hear a terrible voice, whispering to them in the darkness, promising three unholy miracles. First an impossible pursuit. Second an impossible theft. And third an impossible murder. If they choose to follow Old Tom, their lives will be spared and a their deepest desire granted. Could a demon be responsible for their misfortunes? And could a pledge to the demon save them?

With Pipps imprisoned in the hold of the ship and able to give only limited advice, only Arent and Sara (assisted by Sara's brilliant daughter Lia and Sara's dearest friend Creesjie Jens) can solve the mystery that stretches back into the past and now threatens to sink the ship and kill everyone on board...

I really hoped that Turton was going to provide another knock-out as he had with his debut novel, The Eleven Deaths of Evelyn Hardcastle. He came close--but the ending was a real let-down to me for a few reasons. First, and certainly not Turton's fault, I had just come off reading two mysteries where someone involved in investigating the murders wound up being the villain of the piece. Finding out that this was another one of those was disappointing, not least because (unlike the other two mysteries) this particular solution wasn't even satisfying for me. I could, just maybe, have swallowed half of the final duo being responsible (yes--two of the investigators are part of whodunnit, folks), but not both. I also don't feel like the other characters responded to that revelation true to form as they had been presented to us throughout the book.

Outside of my dissatisfaction with whodunnit, the solution is still not quite kosher. I find it difficult to believe that four people (our two main culprits had a couple of assistants) were able to roam around the ship at night, whispering Old Tom enticements to every single crew member and passenger (hundreds!--according to the numbers who are said to have perished in the shipwreck) without having been spotted by somebody. They had to be at it all night to reach everybody.

On the plus side, this was a rollicking adventure that I could not put down. I started reading it at about 6:30 last night and did not stop (and go to sleep) until I finished it. I haven't done that with a book in a long time. So--it was absorbing and interesting. I enjoyed the closed atmosphere setting on the ship. I really enjoyed the characters of Arent Hayes and Sara Wessel and the fact that the "Watson" of the book gets to solve the mystery. Arent is definitely a lot more intelligent and observant than he gives himself credit for. Turton does an excellent job providing us with a broad cast of well-defined characters--from witchfinders to musketeers from the noble-born to the least of the sailors. ★★★★

First line: Arent Hayes howled in pain as a rock slammed into his massive back.

Last lines: She turned her inquisitive stare on Sara. "Where do we begin?"