An Ad for Murder (slightly spoilerish) 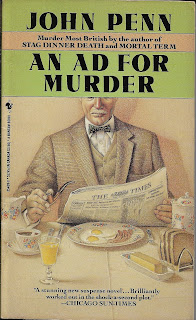 Major Tom Cheryl, DSO, is a World War II veteran. In the normal way of things he doesn't scare easily. But when a series of newspaper ads in the literary section confidently assert: "Coming Soon: The Death of Major Cheryl," he is a bit unnerved. He tells himself that it's just a coincidence--that some author has just happened to pick his name for the title of his new book. But people in the village begin to talk and look at him expectantly...as if he might fall over dead at any moment. And then the accidents start happening. The brakes malfunction on his car. There's a swift push that nearly lands him under a bus. And then a motorcycle rider nearly runs him down and does kill his faithful boxer, Sal.

The death of his dog finally spurs Cheryl to contact Scotland Yard. Chief Inspector David Taylor is assigned to look into matters, but beyond discovering that some (unknown) unauthorized person has used a London publishing house's letterhead to make the request for the insertion of the ads he is able to get no further. Cheryl and his family can think of no one who would wish him dead and his service career wasn't such to have gained him enemies of that sort. Matters become far more serious when a hand-delivered package explodes as Major Cheryl's wife opens it and she is killed instantly. Did the killer miss his target? Rumors in the village now suggest that the major has been behind this all along and the real target was Aileen Cheryl from the beginning. The ads were just a red herring. Is the rumor mill full of truth this time? With a murder to investigate, Taylor finds evidence of a trail that leads to a diabolically cold-blooded killer and an unexpected ending.

SPOILER AHEAD (I must spoil the plot just a bit to explain my slight dissatisfaction. I do not reveal the culprit.)

I first read An Ad for Murder back in the 1990s. I enjoyed the mystery so much that I immediately put John Penn down on my list of authors to look for--and had little success in the used bookshops and sales until the Hoosier Hills Bookfair in the 2010s. Someone must have unloaded their small collection of titles and I scooped them up. Reading this a second time, I still find the plot enjoyable and the characters are well-drawn and interesting. I do cry foul at the lack of real clues available to give readers any inkling of the motive prior to the final few chapters. As far as it goes, I suppose you could say it was fair--after all Inspector Taylor finds out late in the game as well. But we still couldn't have figured it out based on the previous seventeen chapters.

Overall, I did find this to be an enjoyable read. The husband and wife team writing as John Penn do have a real flair for character and narrative. The book moves quickly and holds the reader's interest. If it weren't for my slight dissatisfaction over the way the culprit and motive are revealed, it would be a four-star book. As it is: ★★★ and 1/2.

First line: For a moment he was shocked--stupidly shocked, perhaps--but shocked nevertheless.

Deaths = 3 (one explosion; one poisoned; one fell from height)

Thanks for this review. This sounds enticing. Are there additional titles by the same author you would recommend?

Christophe: I have also read A Deadly Sickness and Stag Dinner Death. The first was before I began writing reviews. But I gave Stag Dinner Death three stars and said that it was an entertaining little puzzle from the post-Golden Age period where fair play isn't as important.