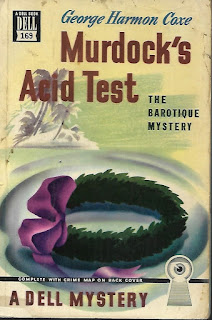 George Harmon Coxe was an American writer of crime fiction who used several series characters including Jack "Flashgun" Casey, Kent Murdock, Leon Morley, Sam Crombie, Max Hale and Jack Fenner as well as writing stand-alone detective novels. Casey and Murdock are both photographers whose camera skills often land them in the middle of events that force them to don a detective's cap as well.

This is the second entry in the Kent Murdock series and it finds Kent and his wife Joyce on a trip shortly after their marriage. Their trip takes them to the private island owned by the father of one of Joyce's friends from school. Sir Stanley Bannister bought the Caribbean island of Barotique upon his retirement from the Colonial Service. The Murdocks look forward to a quiet tropical get-away before he has to return to the photography beat in the newspaper business. Only it's not so quiet. There are six bungalows in the little island colony and they're all full up. And not with happy little tourists. There's a gangster, his former showgirl girlfriend, and his hired gun--all under aliases. There's a suave pushy fellow with an eye for the ladies (and reputedly a harsh hand for his wife). The pushy fellow's brother is also on the island--looking tired and sick, but ready for a fight if needed. There's a bank manager and his wife--a woman Joyce Murdock sums up as a possible Lady Macbeth. There's an East Indian man and his daughter, who is enjoying the freedom of the West just a little too much to suit her protective father. Then there's the other young people--Ralph Coleman, son of the banker, and Kay Joslin (niece of the pushy fellow and his brother). Those two look to be in love, but there's some undercurrent of trouble in paradise. And finally Kay's brother Noel who has chip of sorts on his shoulder.

From the moment they all have drinks on the Bannister's terrace, there is a tension in the air. And later that night the tension builds to murder. Nigel Porter, our suave ladies' man, is found shot to death in the drawing room of his bungalow. There's no police force on the island and the officials won't arrive for a couple of days, so Sir Stanley, knowing of Murdock's connection with crime reporting, asks the photographer to investigate. Murdock does so, but under protest. He just knows it's going to be messy. And he's right. Everyone has something to hide and everyone is telling him lies. There will be two more deaths and a final attempted shooting before the mystery is cleared up...and pretty much everyone on the island will be fed up with his questions by the time he's done. 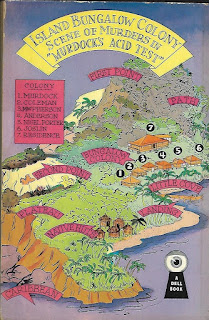 I enjoyed the first Murdock mystery that I read (which was actually the third in the series). Coxe writes from the hard-boiled school, but with a soft touch--more semi-tough (as John from Pretty Sinister Books has called it). There are gangsters and hired guns, but there isn't a great deal of tough talk and fast action. Murdock plays a straight detective game, looking for clues and questioning the suspects. He does get a bit tough in a couple of the interviews, but only to try and shock the witnesses into telling the truth. He's less successful than he'd like to be. I enjoyed the way he used the different types of motive (jealousy, love, revenge, greed, and a gangster's need to keep a low profile) to spread suspicion evenly over the characters. It takes a shrewd eye to spot the clues that will point to the guilty party. Coxe managed to pull the wool over my eyes and I had a good time being fooled. ★★★ and 1/2.

First line: A half-dozen Negroes surrounded Kent and Joyce Murdock the moment they stepped from the agent's launch to the landing-stage on the Kingstown jetty.

Last line: They drank, smiling at each other over the tops of their glasses.