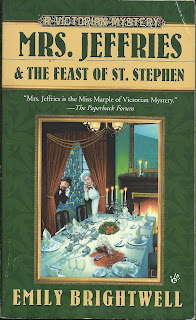 In the weeks leading up to Christmas Mrs. Jeffries and the rest of the servants at Inspector Witherspoon's residence are getting ready for the holidays when their master is handed a rather unpleasant Yuletide gift. The wealthy Stephen Whitfield had been hosting a seasonal dinner of his own his sister-in-law and a few friends when he fell dead into his plate of soup. Whitfield just finished telling those gathered that he had a very special announcement. He then turned red, began to shake, told the guests they had all turned blue and something was wrong with the lights before falling forward onto the table. They are all shocked, but believe he has suffered from a heart attack until the doctor who had been quickly summoned from across the street announced that he believed it was poison and that the police must be called in.

It is soon established that the cause of death was a liberal dose of dried fox gloves leaves in the bottle of Bordeaux brought as a gift by Maria and Basil Farringdon, two of the guests. Whitfield had been the only one to drink the wine--everyone else sticking to the usual sherry before dinner. But Whitfield had guzzled the stuff down like a man who'd just crossed the desert with no liquid refreshment at hand. At first glance you'd think the Farringdons the likely culprits, but it winds up that anyone in the house could have dumped an envelope full of dried bits into the wine at any time. The butler had opened the wine and left it on the stand in the drawing room. Then Whitfield led his guests off to admire his Christmas decorations and everybody milled about in such a way that nobody knew where anybody else was for sure at any given time. It's all a muddle for Inspector Witherspoon--everyone had an opportunity, but the motives keep fading away like snow flakes on a warm window. His superior officer is being pressured to have the case solved by Christmas and so Witherspoon is pressured as well. He just doesn't think his "inner voice" (as his housekeeper Mrs. Jeffries has called it) is going to speak up this time.

But his secret weapon is at work--the secret weapon he doesn't know he has. Mrs. Jeffries, Mrs. Goodge (the cook), Smythe (who handles the horses), Betsy (the maid), and Wiggins (the footman) are all on the case...along with his good friends and neighbors Mrs. Luty Bell Crookshank and her butler Hatchett. Each of these characters have their own sources and methods and can usually collect enough gossip and clues to help Mrs. Jeffries unobtrusively direct Witherspoon's inner voice to reveal the solution. The group have a tough case this time....and Witherspoon is on his way to meeting where the case will most likely be reassigned to another inspector when light finally breaks and the inner voice can speak.

These Victorian era mysteries are very light and fluffy and this one was just what I needed at the moment. A little bit of holiday festivity thrown in with the cozy little investigations of the servants. I did spot the murderer and how exactly it all happened before Mrs. Jeffries, but I didn't mind. It was nice to visit these old friends (I've read several of these over the years). A good solid read for when you don't want anything too taxing. ★★★

First lines" "I do hope you like this, Stephen." Maria Farringdon smiled as she handed the bottle of Bordeaux to her host.

Last line: "And if he does, I 'elp ya hunt him down," Wiggins offered.