The Crimes of Dr. Watson 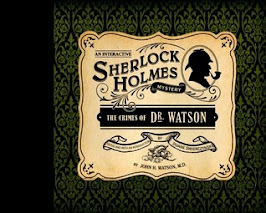 The Crimes of Dr. Watson (2007) by Duane Swierczynski

The book is an "Interactive Sherlock Holmes Mystery" which includes twelve actual clues included in envelopes and described in detail in the text. It centers on the arrest and imprisonment of Dr. John H. Watson and takes place during years when Sherlock Holmes is believed to have perished in the dangerous waters of the Reichenbach Falls. In the days leading up to the crime, Watson receives mysterious letters from various points in the United States. He firmly believes that these are messages from his supposedly deceased friend and when one of the Baker Street Irregulars comes to tell him that there is a strange gentleman who has broken into the rooms at 221B Baker Street, Watson rushes off to investigate.

He wakes up manacled to a hospital bed to find that his old rooms had been set ablaze, the mutilated corpse of the man he found there has been discovered in the wreckage, and Inspector Lestrade believes that Sherlock Holmes's old friend has committed a foul and dastardly crime. With Holmes dead (or at the very least out of reach somewhere unknown), Watson decides to write for help to Colonel Harry Resmo, an American who had visited the rooms in Baker Street and who seemed to possess a logical mind second only to Sherlock's. The main portion of the story consists of Watson's letter to Colonel Harry and the twelve clues--it's up to the reader to clear up the mystery and clear the good doctor's name. We have to figure out what the front page of a newspaper from Thousand Oaks, California; a catalog of Victorian merchandise; an empty matchbook with cryptic handwritten notes; a theater ticket; an arrest report; a railroad timetable and more have to do with Watson's predicament.

Well...this was a pleasant way to spend an evening, though the motive behind it all is a little thin and the writing doesn't try at all to follow the familiar patterns of Watson. But, I guess we can allow that the doctor might be put off his game a bit--after all he is languishing in prison when it's written. It's fun to examine the clues and try to piece the solution together (I didn't and was glad of the sealed solution to give me all the facts). I will say one thing--the surprise twist at the very end of the solution has a hole in it big enough to sail the Titanic through if everything we've been told previously is true. But, then again, maybe it's not. ★★★

First line: I receive many strange pieces of mail--both electronic and the old-fashioned variety--at the Philadelphia City Paper, where I work as editor in chief.

Last line (of Watson's portion): I am weary with dread, and I leave my life in your capable hands. Very sincerely yours, John H. Watson, M. D.

Last line of solution from Colonel Harry: P.S. You see, but do you observe?