Who's Killing the Great Writers of America? [spoiler-ridden review] 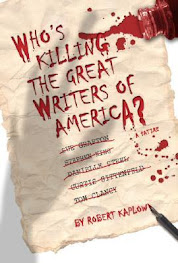 Who's Killing the Great Writers of America? (2007) by Robert Kaplow

Okay...this was truly awful. A convoluted, bizarre mess. I can't even be bothered to try and summarize it myself. So, I'll just give you the synopsis from book flap:

What do bestselling writers Sue Grafton, Danielle Steel, Curtis Sittenfeld and Tom Clancy have in common? They've all been murdered in a manner both gruesome and appropriate to their style. An extremely paranoid Steven King is convinced that he will be the next victim, and so he must leave his heavily-barricaded fortress in Bangor, Maine, to discover Who's Killing the Great Writers of America. This hilarious ["hilarious" is apparently used very loosely here...] send-up of the world of publishing by the author of Me and Orson Welles and The Cat Who Killed Lillian Jackson Braun takes us from Venice to Paris to Maine and offers cameo appearances by Steve Martin, Gerard Depardieu, plus a few surprises.

Just so you know--those writers that were murdered? Yeah, well, they weren't. That's the big twist at the end. [I warned you the review was spoiler-ridden.] What a major let-down. I was all agog wondering if Steve Martin really was the maniacal killer that it seemed he was and figured there was some big twist to do with that....and then I find out that the bodies don't actually belong to the authors we think have been murdered. So...we don't know who the majority of dead people in this book are [which means I don't get to count all the dead "authors" towards my final total for Rick's Medical Examiner Challenge. Now I'm even more disgruntled than I already was.]. Honestly, the only reason I finished the thing is because it was so short and I wanted one more book for my year-end tally.

I can't think of anyone I would recommend this to.... ★ (and that's being generous)

Last line: Truffaut felt his soul swoon slowly as he looked upon his friend, and he heard the snow falling faintly through the universe upon all the living and the dead and the Published.