In the Keep of Time 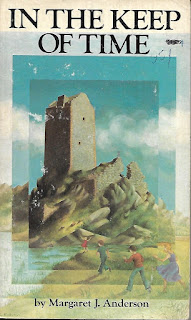 Four English children, Andrew, Elinor. Ian and Olivia (Ollie), are taken from London to Scotland to stay with their Aunt Grace while their parents travel to France. Their father has fond memories of staying in the area when he was a boy--enjoying the countryside and especially playing around the ancient ruin of Smailholm Tower. The children, who are all city kids through and through, anticipate a very boring stay. Little do they know the adventures that await them when their aunt gives them the key to the tower and it happens to be glowing....

When the key glows, the door to the tower opens to another time and the children find themselves in the the time of King James II of Scotland who is marching on the area to attack the English at Roxburgh Castle. The children experience several adventures--including the battle before making it back to their time, but Ollie doesn't seem to be the same. They make another trip through time and make some interesting discoveries about their aunt Grace.

I really enjoyed this when I read it back in the early 80s. I loved the fantasy/time travel elements which are very reminiscent of the Narnia books with the children stepping through a doorway into another world. Only this time they travel to different historical periods in their own world. Anderson vividly depicts the various time periods and it is evident she did her research on the 1400s. It is a fascinating book for children. ★★★

Reading this as an adult, I find a certain portion of the plot to be pretty disturbing. Ollie goes through the time portal first and is separated from the others. When they go through in order to look for her, they find a girl who looks like their Ollie already established in a family of peasants. They call her Mae and claim that she was born and raised there. Here's the thing--if that story is true, then where is the real Ollie? The children take Mae back with them--but she's obviously not the same little girl they knew before. Ollie was a voracious reader and this girl can barely get through Dick and Jane. It seems to me that the real Ollie may be lost somewhere in time...

First line: A sudden shower of rain washed the tall, straight walls of Smailholm Tower, and then the sun shone with a silver light picked out the red stone against the gray-black granite so that the simple building became a monument of beautry.

Last line: "Perhaps they have learned more than that," said Aunt Grace.