Reprint of the Year: Checkmate to Murder 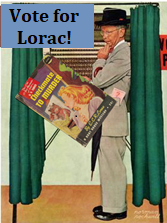 In recent years, Kate at Cross Examining Crime came up with brilliant brainstorm (as she so often does). In the wake of various publishing houses recognizing the virtues of Golden Age (and more recent) vintage crime novels through reprint editions of both well-known and more obscure titles, Kate thought those of us who love those vintage mysteries would like the chance to feature the year's reprints and make a pitch for our favorites to be voted Reprint of the Year. We loved the idea so much that we're going to do it again.This year, as Kate notes, we are back bigger than ever, with ten bloggers taking part. So, this Saturday and next, I and my illustrious colleagues Brad, Moira, John, Puzzle Doctor, Laurie, Aidan, JJ, Dead Yesterday, and Kate will feature our picks of the 2019 reprint crop and make our best bid for reprint stardom. Now, I do have a confession to make upfront--I am (as many of my blog followers know) a challenge-aholic and have been madly trying to finish off the last of my challenges. So, I made my choices based purely on what books I had lurking on my TBR shelves that would work for for my Mount TBR Challenge or books I've read in the past.

First up is a Reprint for those of you like your vintage mysteries draped in fog and set during World War II. E. C. R. Lorac's Checkmate to Murder takes place in early 1940s London. A fog-shrouded night with windows shrouded in black-out curtains or painted over to meet the black-out standards. In Bruce Manaton's barn-like studio, the hush of the fog seems to seep in and focus the concentration of the oddly-assorted group gathered for the evening. Bruce, a talented but as of yet unsuccessful artist, is fully focused on his latest painting--a portrait of a man in the scarlet robes of a Cardinal. The model for this work is Andre Delaunier, an equally talented and unsuccessful actor, who holds his pose with the import of Shakespearean drama. At the other end of the room, Robert Cavenish, a thoroughly respectable Home Office man, and Ian MacKellon, a brilliant chemist somehow connected with the war effort, are thoroughly engrossed in a game of chess. Moving in and out from the kitchen just beyond, Rosanne Manaton, the artist's sister, prepares dinner and runs her own artistic eye over the tableau. Outside, muffled by the fog are various warning signals and other noises. Among them a shot?

For next door, the Manatons' miserly landlord, Albert Folliner, is shot to death in his sitting/bedroom and apparently robbed of his miser's stash. The Special Constable who has been on his nightly rounds comes bursting into the Manatons' lodging dragging a young Canadian soldier as prisoner. The soldier is Neil Folliner, the nephew of the slain man, and the Special Constable swears he has caught the man red-handed. But Scotland Yard sends Inspector Macdonald to take over the case and when he has finished taking statements, examining the premises--both the studio and the landlord's rooms, and following up the clues that escaped the constable's nervous eyes, he finds that all may not be as straight forward as it seems. For instance--if the constable came upon Neil Folliner after the crime was committed, why have the former's footprints been overlaid by the latter's? And what happened to the loot? And is Mrs. Tubbs really just the jolly cockney charwoman that she seems to be? And what about those previous tenants of the studio? 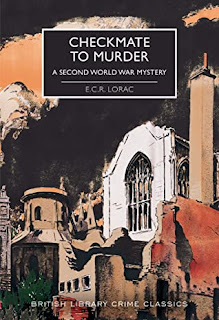 As I told John from Pretty Sinister Books when I first read this (and who tried to warn me away from it), I must have a thing for Lorac's fog-shrouded, black-out-centered mysteries, because I thoroughly enjoyed her Checkmate to Murder (1944). Inspector MacDonald is a very thorough yet very human policeman. He is never quick to judge and he has a way of seeing everything--even the things the witnesses and suspects think they've hidden properly. The mystery is fairly clued--maybe too fairly, because I figured this one out. Not absolutely every little detail, but enough that I'm calling it a win for Inspector Bev.  But figuring out the solution fairly early didn't detract from my enjoyment. The characters are well-drawn and Mrs.Tubbs, Folliner's charwoman; Mrs. Stanton, whose garden backs up against the "murder house' and studio; Mrs. Blossum, the owner of the Green Dragon pub; and Bert Brewer, a rheumatic gardener all add a good bit of local period color to the proceedings. It is an atmospheric and highly enjoyable wartime mystery. If you like Lorac, if you like wartime mysteries, and if you like atmosphere--then Vote for Lorac!
Reprinted in the British Library Crime Classics series (August 2020)
Posted by Bev Hankins at 12:19 PM

Labels: Reprint of the Year

A very fine choice. I’m not known to you but follow Kate and others. My name is Jo Chern. Anyway, I love Lorac and this was the most recent of hers I read and was not disappointed!

Hi, Jo! So glad you stopped by. I really enjoy Lorac--so far I've not found one that I didn't rate very highly (I've read about six and have a few more on the TBR pile).