Reprint of the Year: The Dragon Murder Case 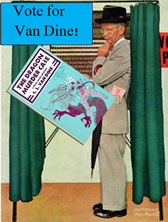 In recent years, Kate at Cross Examining Crime came up with a brilliant brainstorm (as she so often does). In the wake of various publishing houses recognizing the virtues of Golden Age (and more recent) vintage crime novels through reprint editions of both well-known and more obscure titles, Kate thought those of us who love those vintage mysteries would like the chance to feature the year's reprints and make a pitch for our favorites to be voted Reprint of the Year. We loved the idea so much that we're going to do it again.

This year, as Kate notes, we are back bigger than ever, with ten bloggers taking part. So, this Saturday and next, I and my illustrious colleagues Brad, Moira, John, Puzzle Doctor, Laurie, Aidan, JJ, Dead Yesterday, and Kate will feature our picks of the 2019 reprint crop and make our best bid for reprint stardom. Now, I do have a confession to make upfront--I am (as many of my blog followers know) a challenge-aholic and have been madly trying to finish off the last of my challenges. So, I made my choices based purely on what books I had lurking on my TBR shelves that would work for for my Mount TBR Challenge or books I've read in the past.

This week's offering is The Dragon Murder Case (1933) by S. S. Van Dine--reprinted in February 2020 by Felony & Mayhem. It has an opening murder that is sure to intrigue the impossible crime lovers out there. Sanford Montagu, a handsome actor, and a host of others make up a weekend party at the estate of Rudolph Stamm. The Stamm property is known for its dragon pool--the center of various legends, some coming down from the Algonquin and Lenape Indians. It is said that a mysterious water monster (sometimes referred to as dragon) lives in the pool. Matilda Stamm, Rudolph's mother, has a fervent belief in the dragon and claims that it protects her family from those who wish it harm.

When Montagu and the others in the group (Bernice Stamm, Rudolph's sister; Mr. Leland, friend of the household; Alex Greeff, a stock-broker with dealings with Stamm; Kirwin Tatum, a dissipated hanger-on pining for Miss Stamm; Mrs. "Teeny" McAdam, a lady with designs--perhaps on Stamm; and Miss Ruby Steele, a former actress who may still be playing a part)...well, as I say, when the group decides to go for an evening swim, Montagu is the first to change into his suit and head to the pool. He strikes an athletic pose on the diving board, makes a graceful swan dive into the water....and never surfaces. The men (minus their host who had been drinking steadily all evening and was left in the house a sodden state) make diving searches to no avail. Montagu has simply disappeared.

Mrs. Stamm insists that the dragon got him--that Montagu was threatening the family's well-being by his attentions to Bernice. And when his body is later found exactly where she predicted it would be left by the monster and it has three long gashes on the chest which look remarkably like talon marks...well, what's a respectable police detective like Sergeant Heath to do? Bring in Philo Vance, of course. Vance uses his knowledge of mythological lore, creatures of the deep, and his insights into human psychology to bring a rational conclusion to a very bizarre case. 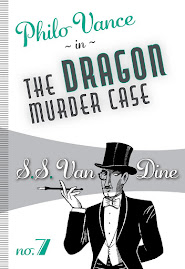 Admittedly, Philo Vance can be a bit trying at times. He seems to know everything about everything--in this case everything about Native American mythology to rare species of tropical fish. But his books do tend to offer up very good examples of early crime fiction. Dragon has a slightly weird feel to it with all the mythology and dragon talk, but the mystery's solution is very logical and must have been quite a puzzle for folks reading it for the first time in the 1930s. It is enjoyable to read an early impossible crime and especially an early American example. Most of the well-known (to the general public) Golden Age crime fiction novelists are British or (in the case of John Dickson Carr) use England as their setting, so it is good to see vintage American detective novels in reprints as well.

One thing that I personally love about this (and which I had forgotten about) is Dr. Doremus. He makes few appearances, but when he does it is amusing. I am a Star Trek fan as well as Golden Age detective novel enthusiast and the good doctor reminds me of Dr. McCoy. He tosses off "I'm a doctor, not a..." lines like a true ancestor of the Enterprise's chief medical officer (see examples in quotes below). He pulls off the crusty "country" doctor in a way that several more recent novels have tried and failed.

First line: That sinister and terrifying crime, which came to be known as the dragon murder case, will always be associated in my mind with one of the hottest summers I have ever experienced in New York.

My dear Markham, you're far too logical. It's your legal training, of course. But the world is not run by logic. I infinitely prefer to be emotional. Think of the masterpieces of poetry that would have been lost to humanity if their creators had been logicians-- (Philo Vance; pp. 44-5)

PV: How did she take this advice, Mr. Greeff?

AG: The way all women take advice--haughtily and contemptuously. No woman ever wants advice. When they ask for it, they're merely looking for agreement with what they've already decided to do. (Philo Vance, Alex Greeff; p. 84)

SH: What do you think made those scratches on his chest, doc?"

DD. How should I know? Haven't I already told you I'm a doctor and not a detective? (Sgt. Heath, Dr. Doremus--still sounding like McCoy; p. 187)

Oh, I say! Must there be hidden meanings in all my observations?...I was merely offering a counter supposition regarding the elusive vehicle. (Philo Vance; p. 212)

RS: Here's an interesting one...The Blow-fish--Tetrodon cucutia. Watch this. He took one of the fish out of the water in the small net, and it inflated itself into the shape of a ball. Curious idea--blowing oneself up to keep from being swallowed.

PV: Oh, quite human, I should say. All our politicians do the same thing. (Rudolph Stamm, Philo Vance; p. 257)

I cling childishly to the trodden paths, for life has a most disappointin' way of proving commonplace and rational when we are hopin' most passionately for the bizarre and supernatural. (Vance; p. 310)

Last line: "I'm not doing so well with my Scatophagus here," he repined. "Not the proper conditions--if you know what I mean, sir."

Thanks for your second nomination Bev! It is always very pleasing to look at the voting booth picture you conjured up. I have only tried one Van Dine, The Benson Murder, but it didn't really work for me at the time. I have wondered if I should give him another go. At least with this reprint, along with the others F&M did, when I am ready, picking up a copy won't be quite so tricky.

Thanks, Kate! Although, I have to say--the fellow in the voting booth doesn't look too sure about his choice...LOL.

I like Van Dine...but I can see that he might not fit everybody's tastes. I do think the solution to this one is rather clever--especially if you take when it was written into consideration.