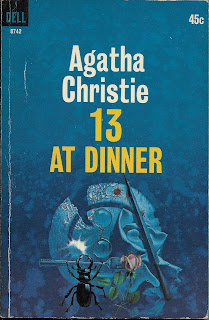 While Poirot and Hastings are attending a performance of the impressionist, Carlotta Adams, the renowned actress Jane Wilkinson (aka Lady Edgware) approaches Poirot. It seems the lady would like very much to divorce her current husband so she can marry the wealthy Duke of Merton (and move even further up the social ladder). Ms. Wilkinson is used to getting her way and can't stand the fact that her husband is being so obstructive and refusing to grant the divorce. In fact, if Monsieur Poirot cannot convince him to divorce her, then she'll just have to jump in a taxi, drive up to the house, and kill him.

Despite the fact that Poirot does not usually dabble in divorce cases of any sort, he is intrigued and surprises Hastings by agreeing to visit Lord Edgware. But they both get a bit of a shock when Edgware declares that he can't understand what they're talking about--he's written to his wife telling her quite plainly that she's welcome to her divorce. Poirot senses that there is something peculiar going on even after he tells the delighted actress that all should be smooth sailing in the divorce department. He's proved right the next day when Inspector Japp tells him that Lord Edware has been murdered and both the butler and secretary declare that Lady Edgware did it.

It appears that a woman announcing herself as Lady Edgware arrived at the house, went into the library to speak with her husband, and left. Lord Edgware was discovered the next morning stabbed to death. Japp isn't worried about the case at all except for one small fact--he's been told that Poirot visited the dead man the day before his death and Japp wants to know just what's up. Well, he's a bit deflated to hear that Lady Edware's motive isn't nearly as strong--after all, she was going to get her divorce. But--still you can't deny the evidence of witnesses, now can you?

But then...he finds out that there's a roomful of witnesses prepared to swear that Jane Wilkinson spent the evening at a dinner party held at the home of Sir Montagu Corner. She never left the dinner table once except when she was briefly called to the phone for what seems to have been a prank phone call. So other suspects must be found. Lord Edware wasn't a particularly nice man--his daughter admits to hating him; he had thrown his nephew (and now the new Lord Edware) out of the house and cut off his allowance; and the butler and a sum of money recently withdrawn by the lord have now disappeared.

Poirot suddenly remembers Carlotta Adams and her very successful impersonation of Jane Wilkinson and becomes worried for her safety. He and Hastings rush to her rooming house, but are too late. Carlotta Adams is also dead from an apparent overdose of veronal. Somebody got Carlotta to impersonate Lady Edgware--but who? And whose hand held the knife that killed Lady Edware's husband? Poirot poses five questions that must be answered before he'll be able to identify the killer and he almost forgets about them when it looks like he finds the culprit by another means. Japp is happy with the initial solution, but Poirot is not and he goes back to his five questions once more.

This is a fine use of one of Dame Agatha's favorite ploys--impersonation. And getting to the bottom of who plotted the impersonation and to just what use it is put is the whole point and the fun of the thing. Of course, I've read this one before and have seen the Suchet version of it more recently, so I really wasn't fooled by the red herrings and distractions that Christie puts in the reader's way, but it was still enjoyable to watch her try. Christie is one of my many comfort reads and I am having a very good time working my way through her work (more or less in publication order). ★★★★

First line: The memory of the public is short. Already the intense interest and excitement aroused by the murder of George Alfred St. Vincent Marsh, fourth Baron Edgware, is a thing past and forgotten.

Last line: P.S.--Do you think they will put me in Madame Tussauds?