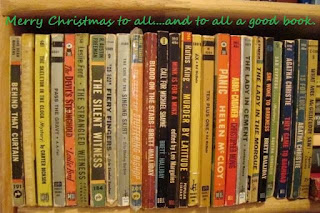 I know you all will be shocked to know that I got a lot of new books for Christmas again this year...thanks to all the Santas in my life my TBR pile has grown by 42 books this Christmas (well...44, but two were duplicates; that's the perils of buying lots of books from Ebay).
First up, Christmas from my parents which was magical: they gave me money and it miraculously turned into books: 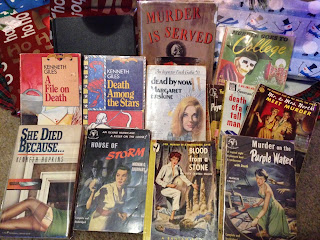 Old Mrs. Camelot (black hard back) by Emery Bonnett; Murder Is Served by Frances & Richard Lockridge; Murder Goes to College by Kur Steel; A File on Death AND Death Among the Stars by Kenneth Giles; Dead by Now by Margaret Erskine; Payoff for the Baker, Death of a Tall Man, AND Mr. & Mrs. North Meet Murder by Frances & Richard Lockridge; She Died Because... by Kenneth Hopkins; House of Storm by Mignon Eberhart; Blood from a Stone by Ruth Sawtell Wallis; and Murder on the Purple Water by Frances Crane
From my husband and son: 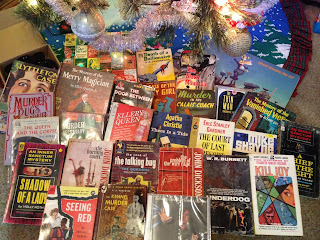 Death of a Bullionaire by A. B. Cunningham; The Black Mountain by Rex Stout; Bloom County: Brand Spanking New Day by Berkeley Breathed; The Lyttleton Case by R. A. V. Morris; The Mystery of the Merry Magician by Ellery Queen, Jr; The Door Between by Ellery Queen; The Case of the Sulky Girl by Erle Stanley Gardner; Murder in the Calais Coach by Agatha Christie; The Thin Man by Dashiell Hammett; The  Mystery of the Vanished Visitor by Ellery Queen, Jr; Murder in Pug's Parlour by Amy Myers; The Queen & the Corpse by Max Murray; Murder Secretary by William Beyer; The King Is Dead by Ellery Queen; There Is a Tide by Agatha Christie; The Court of Last Resort by Erle Stanley Gardner; Tickets for Death by Brett Halliday; A Thief in the Night by Thomas Walsh; Shadow of a Lady by Holly Roth; The Burning Court by John Dickson Carr; The Talking Bug by the Gordons; The Problem of the Wire Cage by John Dickson Carr; Underdog by W. R. Burnett; Kill Joy/Speak of the Devil (Ace Giant Double Novel) by Elizabeth Sanxay Holding; Seeing Red by Theodora Du Bois; and The Kennel Murder Case by S. S. Van Dine [plus a bookish puzzle and a Shaun Cassidy CD to fulfill the nostalgia factor]
Christmas from my Golden Age Secret Santa: 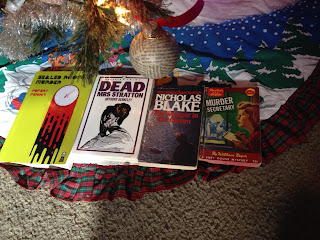 Sealed Room Murder by Rupert Penny: Dead Mrs. Stratton by Anthony Berkeley; The Whisper in the Gloom by Nicholas Blake; and Murder Secretary by William Beyer (I thought I got this cleared off my wish list in time...but apparently not)
And my True Book Addict's Bookish Secret Santa: 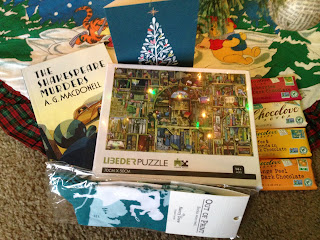 The Shakespeare Murders by A. G. MacDonell plus other bookish & chocolatey goodies.
I am blessed to have so many people in my life to indulge my bookish wants and needs. I hope you all have had a wonderful holiday and have had the pleasure of giving and receiving much goodness.
Posted by Bev Hankins at 3:57 PM

Merry Christmas! It looks like you got a fine haul! Thanks for sharing with us fellow readers all year long!

thank you, Q. And Merry Christmas to you!

All those goodies will keep you busy for a while! Thanks for sharing the pictures.

Thanks, Christophe! Yes, I have plenty to keep me occupied. That's for sure.