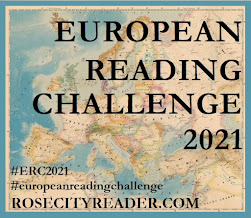 After taking a year off (silly me, I thought I was going to be visiting Europe for real this past year), I'm once again joining Gilion on a tour of Europe with her 2021 European Reading Challenge – where participants tour Europe through books.  And have a chance to win a prize. Please join in for the Grand Tour!
THE GIST: The idea is to read books by European authors or books set in European countries (no matter where the author comes from). The books can be anything – novels, short stories, memoirs, travel guides, cookbooks, biography, poetry, or any other genre. You can participate at different levels, but each book must be by a different author and set in a different country – it's supposed to be a tour. (See note about the UK, below)
WHAT COUNTS AS "EUROPE"?: We stick with the same list of 50 sovereign states that fall (at least partially) within the geographic territory of the continent of Europe and/or enjoy membership in international European organizations such as the Council of Europe. This list includes the obvious (the UK, France, Germany, and Italy), the really huge Russia, the tiny Vatican City, and the mixed bag of Baltic, Balkan, and former Soviet states.
THE LIST: Albania, Andorra, Armenia, Austria, Azerbaijan, Belarus, Belgium, Bosnia and Herzegovina, Bulgaria, Croatia, Cyprus, Czech Republic, Denmark, Estonia, Finland, France, Georgia, Germany, Greece, Hungary, Iceland, Ireland, Italy, Kazakhstan, Latvia, Liechtenstein, Lithuania, Luxembourg, Malta, Moldova, Monaco, Montenegro, Netherlands, Norway, Poland, Portugal, Republic of Macedonia, Romania, Russia, San Marino, Serbia, Slovakia, Slovenia, Spain, Sweden, Switzerland, Turkey, Ukraine, United Kingdom, and Vatican City.
NOTE: Even after Brexit, the United Kingdom is still one country, in Europe, that includes England, Scotland, Wales, and Northern Ireland. So one book from any one of these four counts as your one book for the United Kingdom. I'm not going to be a stickler about it because challenges should be about fun not about rules. However, when it comes to winning the Jet Setter prize, only one book from one of the UK countries will count.
I will again be aiming for the
FIVE STAR (DELUXE ENTOURAGE): Read at least five books by different European authors or books set in different European countries.

I'm glad you signed up again Bev! I always do the Mt. TBR challenge, and I hope to get back to the vintage mystery challenge again in 2021. It looks like I'll still be working from home for a few months at least so I may have time. There's a silver lining!

Hi Bev! I've also signed up for the European Challenge. I think "travelling" through Europe can only be fun. Even if it's through books.

Happy New Year and enjoy all the great books in 2021!