What Remains of Heaven 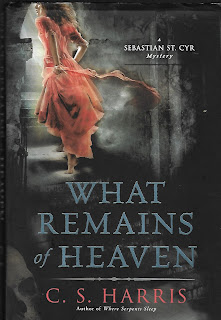 What Remains of Heaven (2009) by C. S. Harris is the fifth in the Sebastian St. Cyr, Viscount Devlin, historical mystery series set in the early 1800s. Devlin has gotten quite a reputation as a solver of crime. So, when the Bishop of London is found dead in the recently opened church crypt in his home village, the Archbishop of Canterbury naturally asks the gentleman sleuth to investigate the death of his (the Archbishop's) favored successor. Devlin might have turned him down, but the sneaky prelate brought his friend and Sebastian's favorite aunt, the Duchess of Clairborne, along to ensure his acquiescence. But when they tell him that the Bishop was found beside the remains of a corpse murdered several decades ago, he's definitely intrigued.

As Devlin begins to dig into the Bishop's recent appointments, he finds a startling coincidence--Miss Hero Jarvis had been to see the man on a regular basis and was apparently the last appointment prior to his death. Hero and Sebastian have a rocky past--their fathers have been at odds politically and Sebastian has more than irritated man who is the power behind the Prince Regent on numerous occasions. The situation has also been complicated by a brief, unexpectedly passionate encounter which may prove to have long-lasting effects on our detective's life. But there are many who have much stronger reasons to have removed the Bishop from this earthly plane.

There is the butcher who had an odd encounter with the Bishop that day--a butcher who has somehow managed to produce enough cash to open a fairly new little shop just a short time after returning from serving a penal transportation. There is the nephew who argued with him and the widow his eldest brother who has secrets of her own. And there's Lord Jarvis himself...who desperately did not want The Bishop of London to be appointed as the Archbishop's successor. Not to mention the well-to do politicians who resented the Bishop's stance on slavery. Devlin's investigations lead him from the back alleys of Smithfield to the powerful residents of Whitehall and suspects range from those already mentioned to William Franklin, the bitter son of American patriot Ben Franklin, who blames the Bishop for his inability to find a welcome in either country.

Once the second corpse is identified, a whole new set of motives is revealed--including a well-guarded secret within his own family. Finding the killer may also reveal a truth about himself that will bring his world crashing down, but his sense of justice won't let him rest until he discovers the killer.

I really enjoy these historical mysteries. Harris mixes political intrigue with standard mystery motives and the reader must be on her toes to figure out which type of motive will carry the day. Harris is a scholar of the French revolution and 19th Century Europe and it definitely tells in her depictions of the period. The details are vivid and she manages to make us feel like we've learned a lot about the period without also feeling like there have bee massive info dumps of historical material. The characters are also well-drawn and intensely interesting--even those who are not so likeable. However, I do hope that we will (soon!) get to the point that we can stop throwing earth-shattering revelations about his family at Devlin. Let the poor man be for a bit! I appreciate having real characters that we can relate to, but I do get tired of constant drama in the lives of my heroes and heroines. ★★★★

First line: His breath coming in undignified gasps, the Reverend Malcolm Earnshaw abandoned the village high street and struck out through the lanky grass of the churchyard.

Last lines: He expected her to make one of her usual provocative remarks on the inequities of modern English marriage laws. Instead, she gave a strange, soft laugh and said, "Perhaps I shall."

Deaths = 4 (one hit on head; two stabbed; one burned in fire)