The Hound of Death 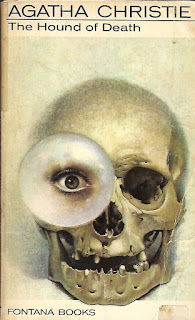 The Hound of Death (1933) by Agatha Christie contains twelve chilling stories with an occasional straight murder, but primarily with strange and unusual deaths that appear to have no earthly explanation. Hercule Poirot and Miss Marple do not appear--perhaps if they had they might have been able to point to earth and blood culprits. As it it, we get to explore the world of the bizarre and macabre with one of the queens of crime. Some of them are quite good and creepy. Others are just weird--so ★★★ for the collection.

"The Hound of Death": The title story features a nun who apparently had the power to stop the Germans in their tracks when they attempted to pillage the convent. Now a doctor with interests in psychic phenomena has her in his care. What happens when he tries to tap into the power?

"The Red Signal": A dinner party conversation turns to a discussion of premonitions and one young man, Dermot West, states that the "red signal" (a feeling when things aren't right) has never failed him. They then sit down for a seance with a medium who issues a warning to one of the group not to go home because there is danger there. It is felt that she was talking to West and when he goes home to find himself wanted for the murder of his uncle it does seem that the reference was to him...but then someone else comes along...

"The Fourth Man": Three men in a railway carriage (a Canon, a lawyer, and a doctor of conditions of the mind) fall into conversation about split or multiple personalities (or dual-souls to put the religious bent on it). A recent case involving a young woman who seemed to have at least three and perhaps four personalities is most intriguing to them. As she originally was, Felicie was an uneducated girl--strong of body but not of intellect and with no musical talent. She suddenly began to exhibit a personality which could speak foreign languages with ease and could sing and play the piano. While the men are talking, the fourth man, who had appeared to be sleeping, interjects that he knows the case personally and he soon tells them a tale that is much stranger than just a case of split personality.

"The Gipsy": Dickie Carpenter has odd visions of a gypsy and each time he dreams of her or sees the vision something dreadful happens. He nearly drowns when a bridge collapses; he falls in love and then his fiancée decides she doesn't love him; and finally his vision seems to bring on death...

"The Lamp": Mrs. Lancaster is a young widow who rents a home rumored to be haunted. She says it doesn't bother her and moves in with her father and her small son. But soon they begin hearing the sounds of a young boy crying...a boy who is lonely and wants a playmate.

"Wireless": Mary Harter is an elderly lady with a weak heart--but her doctor tells her if she takes it easy and avoids shocks that she will still have many more years left. Her nephew persuades her that a radio would be just the thing to help occupy her secluded times at home...and then the radio starts putting out some very startling messages.

"The Witness for the Prosecution": The original short story behind the play and, later, movies. Leonard Vole has been accused of the murder of Miss French, a wealthy elderly woman who took a fancy to him and who has left him as her heir. Vole is sure that his wife can provide him with an alibi--but she has a nasty surprise for him and his Counsel when she appears as the witness for the prosecution.

"The Mystery of the Blue Jar": Jack Hartington is a healthy, apparently sane young man who begins hearing cries of "Murder. Help. Murder!" which no one else can hear. Eventually a ghost becomes involved...a ghost with a great interest in a particular blue jar.

"The Call of Wings": Millionaire Silas Hamer is content with his wealth--a truly happy soul who spends what he likes and just enjoys himself. Then one day he hears the strange music played by a man with no legs and he can be content no longer. He must be free...he must fly!

"The Last Seance": Raoul Daubreuil, a Frenchman, is in love with Simone a sincere medium who has become worn out by her work at seances. He promises her that after one last seance for Madame Exe then she will be finished and he will take her away to rest. But Madame Exe is trying to contact her daughter Amelie--and the materializations have been so vivid. The grieving mother may not let Simone stop....

"SOS": Mortimer Cleveland has the worst luck with his car. It's a beastly, rainy night and he has not one...but two flat tires. He knocks on the door of the only house in sight and encounters a very strange family. The atmosphere in the house is extremely tense and when the two daughters of the house show him to his room for the night he finds that one of them has written "SOS" in the dust on the nightstand. Which of them? And what danger do they fear?

Deaths = 14 (two drowned; one struck by lightning; two shot; one strangled; five natural; one poisoned; one hit with crowbar; one hit by subway train)