The Revenge of the Hound 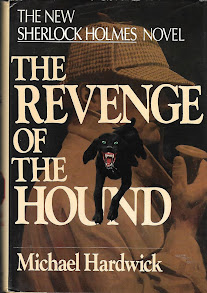 The Revenge of the Hound (1987) by Michael Hardwick
Synopsis excerpts from the book flap: Set in June 1902, only months after the publication of The Hound of the Baskervilles. The coronation of Edward VII has been postponed for what at first seem to be mysterious reasons. Spy scares are rife across England. The working class is filled with unrest. The unthinkable, a British revolution, now seems possible.
Amid it all, Dr. John H. Watson...has become engaged to an American woman...a decision which may affect his long-standing relationship with Sherlock Holmes. Holmes himself is on the verge of a major decision. Although he is not quite fifty years old, he sees the coming age as a time to retire....Yet before the decision can be made, three seemingly unrelated events occur. From Inspector Lestrade of Scotland Yard comes news of the sighting on Hampstead Heath of a creature frighteningly similar to that of infamous Hound; from Holmes's brother, Mycroft, comes a mysterious summons, and rom the deck of an English Channel ferry, Holmes and Watson witness the apparently motiveless murder of a ship's steward.
Suddenly, the midnight oil is brurning again at 221B Baker Street. Holmes's deductive mind is roused from self-indulgence to excitement. The game's afoot. As the coronation of Edward VII grows closer, Holmes and Watson realize that what might be the last case of their career together may decide the very fate of England! {It's amazing how often "the very fate of England" is in danger...}

Hardwick seems determined to drag in references to as many of the original Holmes stories as possible--everyone from Lestrade to Shinwell Jones to Inspector Gregson to Mycroft Holmes appears. I'm sure if he could have found a way to bring Moriarty back from the dead, he would have. I'm surprised that after titling the story The Revenge of the Hound he didn't pull Stapleton out of the mire and have him running about.* We visit places mentioned in "The Disappearance of Lady Frances Carfax" and the "The Man with the Twisted Lip" and more. He seems to think that the more he proves how much he knows of the canon the more willing we'll be to accept his version of Holmes and Watson. But his characterization of the duo rings false throughout the first half to two-thirds of the book. Holmes is in a snit over Watson's impending third marriage and is unbelievably rude to Watson--he even throttles him quite thoroughly (supposedly to prove that a certain witness's story is a lie, but he fully admits that he feels much better after half-strangling his friend). The pair sound and act much more like themselves in the last third of the book, but by that point I'd already given up on them and the improvement didn't help much.

On top of there being too much of what I can only call "showing off my Holmes knowledge," there is way too much going on this story--to quote Watson: "The Carfax case. The hound. The disappearance of Cromwell's bones. Now this murder. Not to mention such incidentals as your concern about invasions, revolution, the 'Yellow Peril' and being commanded to act for the king....you have no time for chasing after random murderers." Hardwick may been "the first man after the late Christopher Morley to be honored the investiture of The Sign of the Four by the Baker Street Irregulars of America, one of the most prestigious honors possible for any Sherlockian." He may have known his Holmesian lore inside-out and front to back, but none of that's useful if the story isn't engaging and seems overly complex. Honestly, the best things about this one were the illustrations by Steranko.  ★ and 1/2. 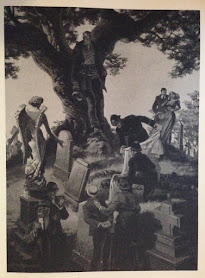 *And speaking of the original story--it would have been nice if the plot had a real connection the original Hound of the Baskervilles instead of what we got. It felt like Hardwick just dragged that in to add some sort of Doyle legitimacy to the whole thing.

First line: I have never been able to decide, to this day, whether or not Sherlock Holmes knew my intentions.