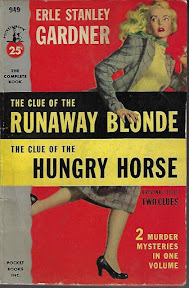 The Clue of the Runaway Blonde (1947) by Erle Stanley Gardner

First of two novellas featuring Sheriff Bill Eldon. Eldon is an old-fashioned sheriff who relies more on his knowledge of people and how they behave than on new-fangled ideas such as forensic evidence  and finger-printing--that's what he has his undersheriff George Quinlin for. But the political bigwigs don't think that Eldon is the man for the job anymore and are hoping to show him up for the old fogey he is and get a younger man on the job.

When a young blonde woman is found stabbed to death in the middle of Sam Beckett's new field with no footprints leading to or from the body, it looks like a real stumper has come along and it should be just what they've been waiting for. Difficulties arise when circumstantial evidence seems to point towards Quinlin's household and so they bring in a "consulting criminologist" to outshine the sheriff. But Eldon isn't out of the hunt and he proves that newer doesn't always mean better.

For a novella-length story, this little mystery packs quite a lot of action and detection into 120 pages. Eldon becomes quite interested in the old Higbee place (in the middle of Beckett's new land) and what he thinks the girl may have been doing there. He follows up clues that the criminologist doesn't even notice and proves that he's still got what it takes to keep law and order. There is also the subtext of politicians trying to manipulate civic appointments to their liking and Gardner certainly shows what he thinks of that.

A fun, quick-paced story with a clever answer to the seemingly impossible crime. ★★★★

First line: Cold afternoon sunlight made a carpet of long shadows back of the eucalyptus trees along the road as Sam Beckett opened the gate of the old Higbee place and drove his tractor into the eighty-acre field.

Last lines: The sheriff chuckled. "This here consulting criminologist didn't know it. If he did he didn't think of it--not until I pointed it out to him." 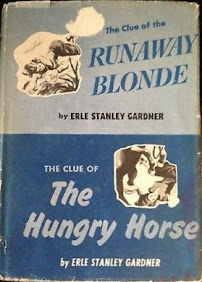 The Clue of the Hungry Horse (1947) by Erle Stanley Gardner

Sheriff Eldon's political enemies are still searching for ways to oust him out of office. This time they have a rich, L.A.-based businessman named Calhoun on their side when an unknown woman is found dead in his stable. Things don't start off too good for Eldon when the woman is initially identified as Calhoun's daughter. Eldon's mistake is just the kind of thing those opposed to him are ready to jump on.

The doctor is ready to call it an unfortunate accident--the poor girl was kicked in the head by a nervous horse. But Eldon insists on murder (grabbing for headlines--in the opinion of the antagonistic District Attorney). When the evidence starts coming in, it begins to look like Eldon assisted the murderer to escape, but when the actual weapon is planted on an unsuspecting innocent witness Eldon knows he's got his murderer and is ready to defend his deductions before the Grand Jury.

Once again, Gardner puts together a quick-paced murder mystery. Though not quite as solidly plotted as Runaway Blonde, it is still a good puzzle mystery. The character of the sheriff is a big draw and it's definitely fun to see him get the better of those who are out to see his downfall. ★★★

First line: It was 7:55 when Lew Turlock answered the phone and was advised that long distance was calling Miss Betty Turlock.

Last line: The sheriff chuckled. "I saw her," he said. And then, a few seconds later, as he was slipping out of his outer garments, added, "first."

I really like the novella length stories by ESG. They are just right for a read before turning off the light at night. I always think of him heading out into the desert with his secretaries (raised eyebrow) and dictating these stories out there. I do like the non-Perry Masons especially and am slowly working my way through them. Then I will be ready to head back to the office with Paul Drake and Della Street.

Rick--yes, these were a lot of fun and nice, light reads--easily read in a sitting.