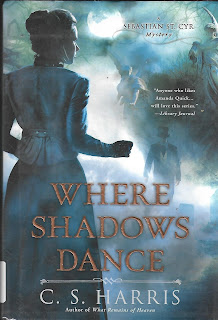 This time Sebastian St. Cyr, Viscount Devlin and sometime investigator, faces an unusual situation. His friend Paul Gibson asks him to investigate a murder that cannot be acknowledged without getting the surgeon and anatomist into trouble. When Gibson hears about the death of Alexander Ross, recently a young rising star at the Foreign Office, the surgeon and anatomist wants to examine his heart to see what caused a man in his twenties to die of heart failure. the only way to do that is to arrange for the body snatchers to lift the body from its grave (and that's not exactly legal...). When he begins to examine the body, he discovers  a healthy heart and a nasty little stiletto wound at the base of the skull. The man's been murdered and Gibson doesn't want a murderer to go free. But as he tells Devlin

It's not like I can walk into Bow Street and say, "By the way, mates, I thought you might be interested to hear that I bought a body filched from St. George's churchyard last night. Yes, I know it's illegal, but here's the thing. it appears that this gentleman--whose friends all think he died in his sleep--was actually murdered.

No, that wouldn't do at all. Luckily Devlin doesn't like to see murderers go free either, so he agrees to investigate even though it's going to be tricky. At first it seems that the likeable young man was an unlikely candidate for murder, but the further Devlin digs the more he learns about shady dealings, spies, and a plot to win allies in the fight against Napoleon. Ross was an honorable man and when he discovered dishonorable doings, he was bound to report it. But someone silenced him first. But who? Was it the Turkish diplomat? Perhaps one of the Russian contingent? Or maybe a French spy in the pay of Napoleon? There are also rumors of an American connection. It isn't until Devlin gets too close to the source and the villains kidnap his bride-to-be that he finally figures it all out.

This is another grand historical mystery. Harris does well pulling political events of the time into her stories and, as I mentioned in the previous book's review, giving the reader both personal and political motives to sift through. One never knows which type of motive will wind up being the true one and it keeps the reader on her toes. There are hints aplenty to point the way to the solution, but it will take a reader more observant than I to recognize them as they come. Another excellent read. ★★★★

I haven't talked much about Devlin's personal life in these reviews--there is a thread of deceit and family cover-ups running through his story that I'd hate to spoil for anyone who hasn't read these but who wants to give them a try. Let me just say that he starts out in love with one woman...various things happen that make that relationship impossible and then he winds up in a relationship with the daughter of his nemesis Lord Jarvis. Hero Jarvis is a strong female character and well able to match Devlin in courage and intelligence. I can only hope that Harris will allow the couple to work their way through events and that Devlin won't have another shock or disaster thrown in his path. I enjoy this series very much, but I can't stand authors who can't let their hero/heroine be happy for more than about five minutes (Elizabeth George, I'm looking at you.)

First line: A cool wind gusted up, rustling the branches of the trees overhead and bringing with it the unmistakable clatter of wooden wheels approaching over cobblestones.

Last line: For his world had narrowed down to the silken hair that slid across his belly and the heated invitation of her legs wrapping around his hips and the gentle wonder with which his wife whispered, "Sebastian..." (and...that makes our historical mystery sound very much like a bodice ripper...)